What’s this? Another review!? But why? A rip in the fabric of time? Well, since I accidentally absorbed too much nuclear energy from that downed submarine and then quantum leapt about a month into the future, thus missing a month of posts, I’ve decided to dedicate time to a week long of catch-up movie reviews that all center around one of my favorite stars of the smaller cinema, Mr. Bruce Campbell. So hop on board my invisible spaceship and we’ll blast off on another adventure in the world of Sci-Fi made-for-TV Movies!

A long time ago, in a galaxy that was the one we we’re in….

Come with me to a place where aliens from other planets are taking over our planet (that’s Earth) and enslaving humanity – a concept so rich in imagination and irony that you’ve not only seen probably at least two movies with that as the plot, but you’ve maybe thought of your own theories about what could lay, or lie, out there beyond the stars, be it weird looking kids in a disco ball space ship playing synths like late seventies era Tangerine Dream, or hideous killing machines without mercy that physically resemble insects but emotionally resemble cats.

Now you might think you’ve seen it all when it comes to evil aliens from outer space, or maybe you think you know more than you do, or perhaps vice versa. Either way, you’ve never seen the gem that is Alien Apocalypse. You haven’t seen giant termite aliens harvesting our planet for its delicious wood (huh huh, delicious wood, huh huh) and you’ve never seen the Bulgarian countryside looking so nice. Made with actors that had heavy accents, the film therefore had to be completely dubbed by English voiceover actors – except of course for our man Friday, Bruce “The-Star-Of-This-Film” Campbell, and his co-star Renee “Hey-it’s-Gabrielle-from-Xena!” O’Connor. They, being Americans, get to keep their voices, and star as two NASA people from a ship that came back to the wrong ant farm. Ok, Ants aren’t Termites, but are Termites Ants? And why am I capitalizing Ants and Termites? Do I for one welcome our insect overlords? That is yet to be seen!

So it all goes down in the woods of Oregon, exactly where one would expect the battle for the liberation of Earth to be fought. Bruce and Renee are captured and used as slaves to move wood from over here to over there, and you get to watch two actors try to make arbitrary wood-moving look interesting and like something that would break a man’s spirits. Yet again, we have a film that knows its limits, and like Iggy Pop’s singing, deals within them rather than fighting them (until that early nineties stuff where he was trying to sing like Perry Farrell or something). The jokes are abundant and uncompromisingly cruel (who thought decapitation could be so hilarious?) but don’t compare to the simple humor of bad wigs, bad acting, dubbed dialogue, and actors who very obviously look at their marks on the ground before stepping up to them. Is that bad? Of course not. If you can’t follow the simple joys of a zero-budget medical practice (the only ailment anyone has is a bad back, which is easy to fix without even much acting) then what are you doing watching this movie in the first place? It’s all about getting these simple joys out of what movies should be about; action, drama, aliens, laser cannons, green blood, and of course, a love story so forced between actors with so little chemistry, you’ll want to pop in Twilight. HAHAHA. That’s just a joke. Though I have heard that Twilight DVDs, when broken, make excellent cutting tools. That’s just a hint for any potential Twilight fans who are reading this, which I’m trying to actively keep at zero. 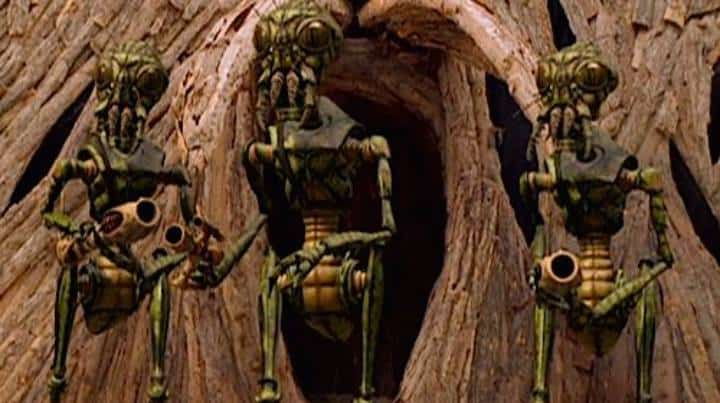 So this is yet another movie where Bruce “The Chin” Campbell is the whole reason a movie is watchable for me. Where terrible special effects, corny dialogue, and sets that were made with the budget of an inner city high school are all simply aids in the Stooge-esque vaudevillian ‘back-of-the-crowd’ antics that everyone’s favorite man with a chainsaw hand performs with the seemingly slightest of ease to the joy and glee of all us Bruce worshipers, who all think about what about could have been if only we’d been a little older, a little taller, had bigger tits, and maybe had been a woman in the first place. I tell ya folks, and if I haven’t made this clear enough yet, then you’re not really reading these, I don’t care how bad the TV movie may be, if it stars Bruce Campbell, I will watch it repeatedly. Which reminds me……..