There’s a lot of confusion in the stores this Halloween Season. A lot of Monster Kids, Goth Girls, and Obsessive Nerds are combing the aisles of their local grocery stores looking for spooky treats of the breakfast kind. What stores have them? Are there 5 or 6 MONSTER CEREALS, now? I thought there were only 3–What’s going on?

It may seem silly but these MONSTER CEREAL(pronounced surreal) characters are very important to some. A lot of kids who grow up feeling like misfits and outsiders love the often misunderstood monsters of the movies. Halloween is like Christmas to those who long to escape conformity and are drawn to the stranger things. Seeing some fun loving freaks in the

supermarket among the bland and boring products on the shelves, Like a Pink Frankenstein Monster, A Buck Toothed Vampire with pointy hair, and A Well Groomed Ghost, somehow symbolizes a subversion of the suburban to weirdo’s like Mr. Lobo. And if you are reading this–perhaps you might feel that way, too.
General Mills who at one time owned the toy company Kenner always had a their finger on the pulse of sugar sweetened merchandising aimed at youngsters. In the early 70′s, prompted by the

success of LUCKY CHARMS, they released a chocolate-flavored oat based cereal with marshmallows called COUNT CHOCULA(originally Dr. Count Chocula) and a strawberry-flavored oat based cereal with marshmallows named FRANKEN BERRY(not after comedian Al Franken). These MONSTER CEREALS were so popular that they soon introduced a ghost called BOO BERRY. An artificially flavored werewolf named FRUTE BRUTE

was released in 1974 but was discontinued. In the 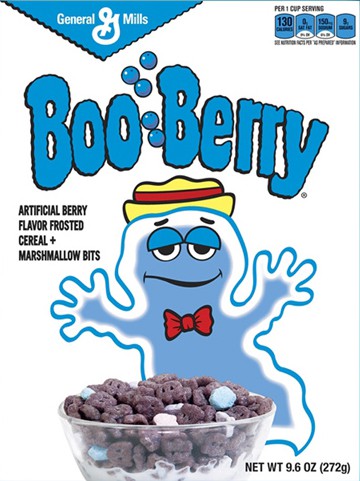 The pink food dye in the original FRANKEN BERRY, as MR. LOBO remembers used to turn your stool reddish…he’s glad to know it wasn’t just him–it was called FRANKEN STOOL according to Wikipedia. We wonder how long General Mills will let that stay up there.

The cost of oats, one must imagine, must have gone way up. ALL of the MONSTER CEREALS since 2010 are ONLY made seasonally for HALLOWEEN and contain NO OATS as per their original formulas. They always contained some corn but they are now made entirely with genetically modified corn starch. So now they are a true FRANKENFOOD!

This autumn for first time in history, General Mills is releasing all five monster cereals together for purchase during the Halloween season. 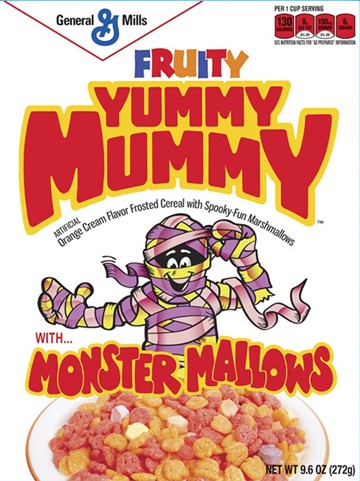 Additionally, special retro edition boxes of all five cereals with their original packaging art will be sold exclusively at TARGET.

That means there are 10 different packages out there–2 designs for each monster.

Will Mr. Lobo be out there like every other cryptser hipster buying up these false gods from his childhood, cluttering up his cabinets, risk altering his DNA, and turning his feces all kinds of new colors? HELL YES!

WARNING, IF YOU SEE A SIXTH MONSTER CEREAL it is not endorsed or authorized by GENERAL MILLS and there is an active RECALL of the new version of MR. LOBO’S CEREAL manufactured by AMPERSAND CEREALS who apparently violated 1000 copyright and trademark laws by changing the look of the officially licensed MR. LOBO’S CEREAL to closely resemble GENERAL MILLS MONSTER CEREALS–going as far as having employees sneaking into stores and putting them next to the other cereals and shoving them into aisle end caps and store displays. If you have purchased them by accident return to the store immediately. This design has been discontinued and litigation is pending.

You have no legal right to eat MR. LOBO’S in this format. However, if you are missing a more OATY CRUNCH and you’d like to eat a SIXTH Halloween themed cereal and not take a bite out of General Mills here is what you do. Buy a box of the GENERAL MILLS cereal PEANUT BUTTER MULTI-GRAIN CHEERIOS which has a combination of oats and corn like the original MONSTER CEREALS of the 70′s did. Also, buy a container of KRAFT JET PUFFED tiny marshmallow MALLO BITS–you can find them near the Hot Cocoa mix. Mix in the MALLO BITS into the PEANUT BUTTER CHEERIOS and mix well. Print out the box front art from this website…email us for a PDF. Cut out the art and paste on to the front of the Cheerio’s box– And VIOLA! You CINEMA INSOMNIA fans are now ready to eat a bowl of MR. LOBO’s CEREAL or at least a reasonable facsimile! HAPPY HALLOWEEN!