An American Werewolf in London

There’s a place in our soul that we try to fill by extending our understanding of ourselves beyond the realms of reality, looking instead to the nether regions of our minds where the abyss stares back into the eternal darkness of our expanding consciousness. Then there’s images attached to celluloid accompanied by audio bits that synch up with the visual bits and form something we’ve come to call a movie. An American Werewolf In London is one of these movies.

If you’re like me, you know that in America’s present exists in the late seventies and early eighties, before that is the past, after that is the future. So this film takes place in a constant state of ‘now’ like many of the films of those eras produced. I realize you might think I’m biased or that the idea of a present existence in the past is ludicrous, but you are wrong. Just flat out wrong. Like, you are Steven Spielberg in 1979 saying “I think we’ve got a good picture here!” That’s how wrong you are, and I feel bad for you.

Speaking of feeling bad, have you ever backpacked across the moors while in England and been attacked by a naked psychopath? If you answered yes, then you probably shouldn’t read the rest of this review. The man known as John Landis helms what could be considered a horror-comedy picture, but ends up just being more horrifying due to the realism it brings. No, this is no Evil Dead II, but there is a talking corpse that cracks a joke or two while his lycanthropic friend sweats in fear and terror. I really have to hand it to David Naughton, fresh off his stint of being a pepper, who plays David and gives a performance that’s makes you feel like you’re him. You really identify with the way he addresses his lot in the film, trying to get arrested, the dream sequences featuring the Muppets (one of two Frank Oz appearances in the film, technically), the waking up naked in a zoo and having to steal balloons from a little boy in order to cover your shame ’til you get back to the English nurse’s (who you’ve been shacking up with) house. I REALLY identified with that last part.

This movie has it all, some beautiful character development, some early-on and horrifying violence against one of our two, count them, two, not a group of people who would never hang out together lest it be for a horror movie, but two protagonists, and what every horror movie needs, NUDITY! And it’s actually tastefully done and not just a half porn. Perhaps this film’s most glorifying element would be the iconic transformation scene which made this film the Star Wars of werewolf movies. Besides also inspiring Michael Jackson’s ‘Thriller’ Video, the transformation scene is legendary because it not only holds up all these years later, but is easily still more convincing than any over-blown CGI transformations that have undoubtedly replaced the king, Rick Baker’s, mechanisms. The film not only won an award for Outstanding Achievement in Makeup, but was also the reason the award was invented, and therefore the first movie to win such an award.

I love when directors switch genres like Landis did. he had just had a string of hits with Kentucky Fried Movie, Animal House, and Blues Brothers before he decided to take a somewhat more serious route, and it turned out to be the right move. Not so much for a Mr. Spielberg, who after hits like Jaws and Close Encounters decided to turn to comedy for 1941, which turned out to be the wrong move. But Landis couldn’t have had the amazing success without all the amazing makeup effects that Baker afforded him. The way Jack, as a talking corpse, gets more and more decayed in subsequent appearances, is subtle, but integral as a reminder of our own inevitable demise to the black void of decay as our shell deteriorates without a working heart to pump vital fluids to it’s extremities and is finally laid to dust as the wind blows us across the sands of time where we’ll rest in eternity, as our descendants enjoy the thrill of fear perceived by the films that spout off about our miserable fate. So strap in and enjoy An American Werewolf In London, and remember, never tell your dead friend he looks like a meatloaf. It’s just bad manners. 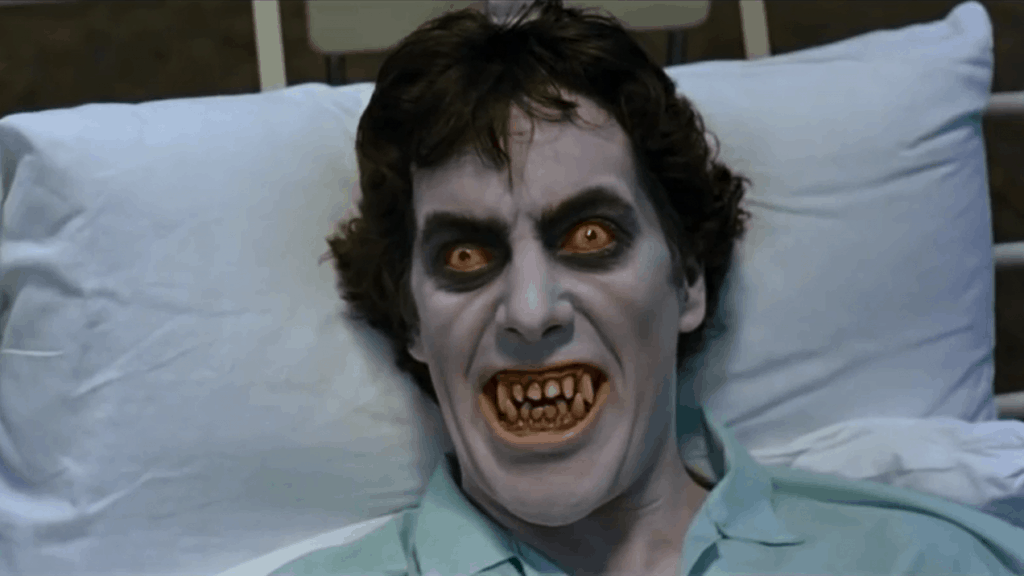