It’s Friday night, and the mood is right, to get freaky with some Bubba Ho-Tep, possibly the high water point of Bruce Campbell’s acting abilities on film. To compact this film into a general description is to sound like an insane person and probably keep people from hanging out with you. In summary, it’s the time honored classic tale of a man who might be Elvis is rotting away in a retirement home with his friend who is JFK but in a black man’s body and they’re being attacked by a mummy who has a taste for old people’s souls. Ya know, that, thing.

From the mind that brought you four Phantasm movies and three BeastMaster things (he wasn’t actually involved in II and III, but I’ll blame him anyway) comes a heartfelt tale about what happens before you die. Not in the stabby stab “but I had my whole life ahead of me! NOOOO!!!” way, but rather in the “you know, Donald Trump offered my grandson a job yesterday in my front yard last night,” kinda slowly losing your mind because you’re not Tony Bennett, NONE OF US ARE TONY BENNETT!!! Seriously though, that guy can sing, and is still doing so at 86!!!! So yeah, that’s amazing, but I got news for you folks, that aint gonna be most of us. For what you are going to look and feel like in those golden years (whop whop whop) look no further than today’s hero Sebastian Haff (or Elvis, depending on how you look at it).  He’ll let you hear him say life’s taking him nowhere (Ang-gel!).

In a genre filled with over the top theatrics and cheap thrills, Don Coscarelli has kept it real by making it fresh with his genius ingenuity stuffed into tales of imagination roasted over flames of fascination. But hey, don’t take my word for it… or wait, do, since that’s why you’re here. There’s some fun in having a different director for each film in a series, but Don is the George Romero variety of filmmaker who gets to write and direct all the films in his series of weird horror that started with his 1979 film Phantasm. Other than The Beastmaster, which he only made the first one of, Don hasn’t done much of note outside his Phantasms other than the not-so-long-ago movie John Dies At The End (which I still haven’t seen, shame shame I know) and of course, the ever-loved Bubba Ho-Tep. 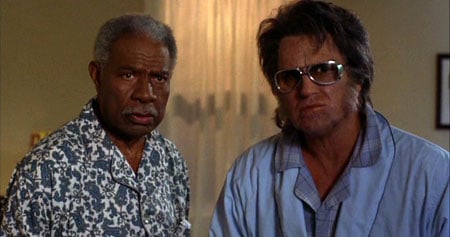 Ok, chances are you’ve already heard about this movie from a friend who may have also tried to show some of it to you and you thought A. What the hell is this? and/or B. Why am I watching this? Well, for starters, this is a movie starring Bruce “Elvis” Campbell and the legendary Ossie “I’m famous for actual good acting” Davis as two old men in an old man buddy comedy that puts I’m Not Rappaport to shame. As for why, I’m glad you asked. This film has all the tones of an old man coughing a joke to you while starting to laugh and cough harder to the point where you’re more concerned about the old man coughing than the stupid joke you had already heard before. This is also assuming that you’re a decent human being and aren’t standing there screaming “DIE OLD MAN, DIE!!!” and you actually did care about this old timer’s health. If not, you probably aren’t going to get into this movie. This film is for that crazy part in all our brains that reminds us that we will always be the heroes in our heads and hearts, no matter how crazy or hate filled we may be. It’s a heartstrings tugging tale of redemption and humanity told through the eyes of those forgotten but not yet gone. It’s also about a mummy.

Bubba Ho-Tep is the name of a Texas mummy who comes to life at night and lives off of the souls it sucks from unsuspecting senior citizens and it’s up to a man who is either Elvis gone into hiding as an Elvis impersonator to escape the perils of success, or he’s an Elvis impersonator who’s kinda wedged his brain, with some help from a little dementia, into believing he’s the real Elvis. Either way, his career ended after he broke his hip falling off a stage during a show, and now he’s hanging out with an elderly black gentleman who is either actually John F. Kennedy, the 35th president of these United States of ‘Merica who was secretly turned into a black man by the government to get rid of him instead of just making him dead, or he’s a crazy old man and, well I think you get it. Maybe that helps you understand the kind of movie this is, or maybe you’re more confused now than before. Either way, I’ve done my job, because we both know you either already love this movie, or are looking forward to loving it thanks to this review and are already putting your boots on and grabbing your coat and hat while still somehow reading this in order to go buy the film. Either way, I’m a happy man, relatively at least.