Hey folks, Fred (Cosmic Charlie) Frederick here, with a review of one of the all time greats, Dead Alive, or Brain Dead if you aren’t in the United States. From the man who brought you the Lord of the Rings trilogy, Peter Jackson, comes a movie from before he made those movies, that makes Evil Dead II jealous for how much crazy they packed into this thing. Dead Alive, as I will refer to it for the rest of this review, is what happens, apparently, when a New Zealander decides he wants to make the funniest and goriest film that anyone’s ever even tried to make, in New Zealand, and ends up with one of the greatest horror-comedy blends of all time, that lets Mr. Jackson (the Peter one) stand right next to Sam Raimi in horror-comedy legendary status, and makes you wonder how the hell these guys ended up making two of the most profitable trilogies of the last 20 years, but then that makes you think about Star Wars Episodes 1 through 3, and then… NO, DON’T STAB YOUR EYES OUT! IT’S NOT WORTH IT!!! 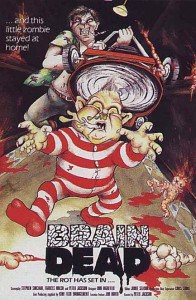 g back to the movie. It might not be the ideal date movie for your blind date with the boss’s spawn, but if that is your choice of cinema for your incredibly awkward evening, and this possible significant other stays ‘til the end, then you may have met your soulmate, and I would suggest chaining them to the floor, next to the couch preferably, since they’ll need a place to sleep, and you only have a twin bed, plus you don’t have money for a new bed, so the couch for them, it’s not like they’ll mind, I mean hell, they just sat through Dead Alive with you! All kidding aside, I really do think it’s a great date movie. Really. Besides all the gallons of blood and tons of gore, what you have is a tale of awkward love and restrained desires that captures the romantic side of any conscious human’s heart.

It’s the timeless tale of a momma’s boy who falls in love with the gypsy girl at his local grocer, probably because it’s the only place his mother lets him go to when she even lets him leave the house. The gypsy grocer girl likes him back, and is a good example of a woman who knows what she wants and is willing to deliver groceries to a stranger’s door in order to get it. So our adorable couple end up going on a date, but then nosy mom gets attacked by a weird rat monkey thing that would make Ray Harryhausen go “ewwww.” The rat monkey attack leads to zombification, obviously, and then one zombie leads to more, as is the zombie way, and from there on, zombie-filled hilarity ensues. The rest of the movie is a bunch of insane twists and turns and a Three’s Company meets Weekend At Bernies style craziness that combines laughter with wincing, which I call lincing. I don’t wanna give too much of the insanity away, but, I will say that if this dude meets Ash from Evil Dead II, they would have an epic chainsaw vs. lawnmower match and I don’t know who would win. I should also mention that this film holds the record for most fake blood ever used in a film, though I think Kill Bill is a close second.

hink every Peter Jackson film suffers from (besides on set foot odor) and that’s length. By the end, the glorious and uproarious end, you’re probably gonna feel so drained and grossed out that the climactic finale will be a welcome rest from the insanity, while also cranking it up a notch (BAM!) to where you’re desensitized and enjoying the nonsense enough to get your second wind and be able to go out for pizza after viewing, rather than spending the rest of you night over your porcelain throne, crying to god “I just wanted to see another movie by the Lord Of The Rings guy! Whyyy!?!?” 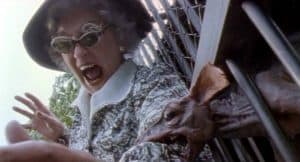 Probably more upset about her dress being ruined.

Hey, true story, I was eating chips and salsa while watching this film, and the part where the son pulls his crush’s dog out of his zombie mother’s mouth literally made me dry heave and have to stop the film so I could recover. Another true story, I wanted to see this film for the longest time based on my local video store having the box with the tagline on it “the goriest film ever made.” Years of looking at the image of a man’s rib cage being ripped out of his chest must have warped my fragile little brain somehow, when in fact, if I had just watched the movie, I probably wouldn’t have liked it, what with the weird comedy elements and me being a child with no comprehension of such nuances in the horror-comedy cinematic universe.

As far as pinball goes, I would love to get my hands on a Champion Pub pinball machine, part of the 90s pinballs with themes that absolutely no one was asking for (see Fish Tales and Junkyard as other examples) and turn that into a Dead Alive themed machine, with the Pub fighter guy remodeled into the giant zombie mother from the end of the film (spoilers, whoops). And the punching bag at the top right could be the evil baby, which sounds horrible, saying the baby could be a punching bag, unless you’ve seen the movie, which, by now, you should have already ordered on the internet, because seriously, if you haven’t seen it, you are not a full human yet. YET! So make it so, and hey, if you know anyone with a pinball machine that they want to give to me so I can deface it to suit a better theme, CALL ME! 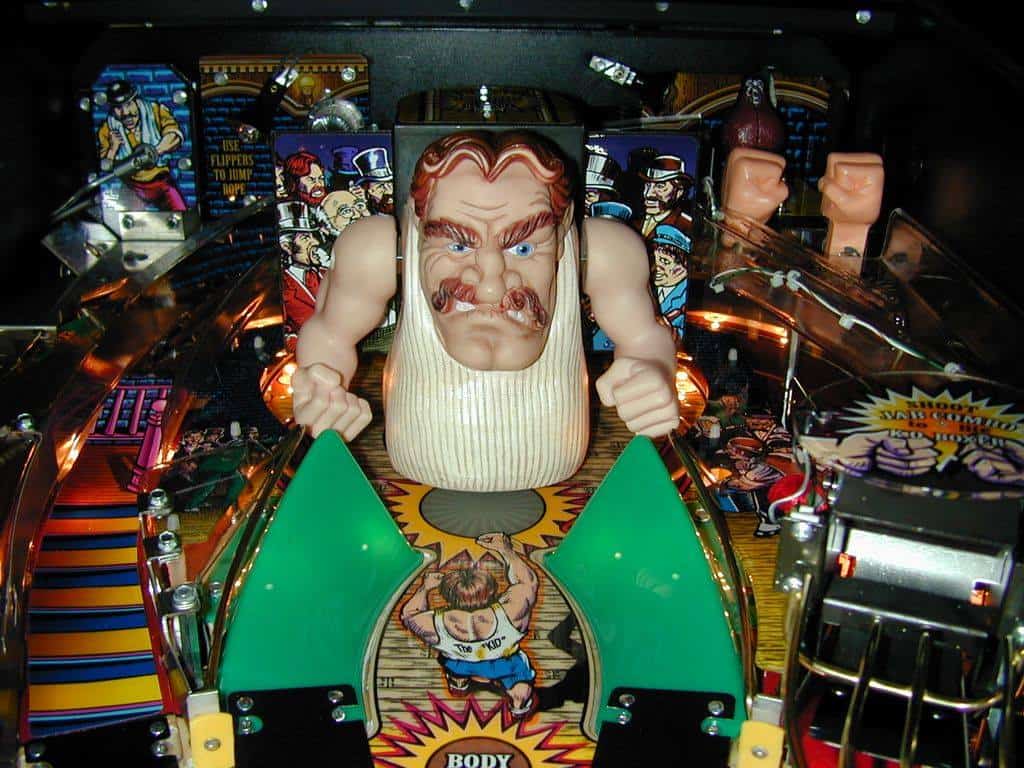