DISMEMBER THE ALAMO Was A Night to Remember!

Home » Blog » DISMEMBER THE ALAMO Was A Night to Remember!

The lineup was amazing. The first film of the night was NIGHT OF THE CREEPS (1986) staring the red-blooded resolute stud: Tom Atkins 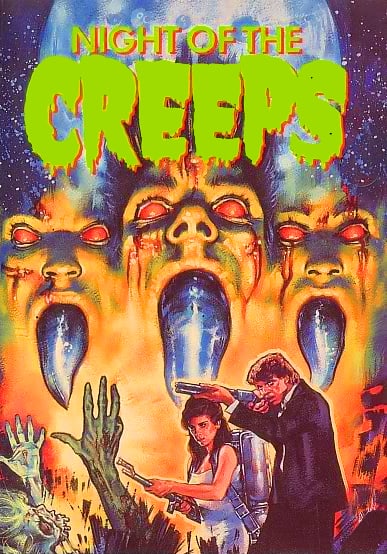 . The film is delightfully 80’s and is about an alien experiment gone terribly wrong, resulting in slug-like brain parasites who enter  through the mouth, turning dumb jocks into bloodthirsty zombie-like incubation stations who happen to invade on the night of the Formal… sort of. Actually there is so much going on in this movie that I’ve yet to read a synopsis that does it any justice. Needless to say, this is one of our favorite films and we even celebrated by building a realistic looking flame thrower and pinning a bunch of black slugs to a prom dress for my costume:

The second film we had the supreme pleasure of hosting also stars the well-built two-fisted beefcake Tom Atkins and co-stars the delicate and radiantly beautiful Stacey Nelkin the film, of course, was HALLOWEEN III: SEASON OF THE WITCH(1982).

This film is dear to our hearts but largely unappreciated as the classic it truly is. Season of the Witch is a fun popcorn flick about an alcoholic doctor (Atkins) who, with the help of the grieving daughter (Nelkin) of a deceased patient, uncovers a conspiracy to sacrifice children in a druid ritual devised by a toy-making warlock who runs large Halloween mask-making company.
Yes you read that right.

If you’re a horror fan (which we’re guessing you probably are if you’re reading this) you may know that this movie catches a lot of flack for deviating from the story of the babysitter stalking maniac Michael Myers. In fact a lot of people down right HATE this film. To these people I say: I’m sorry that someone tried to put some magic in your life. I’m Sorry that someone tried to put some more Halloween spirit in the franchise. And I’m sorry that you can’t just enjoy a genuinely fun movie.

I kind of think of Michael Myers and Jason are one trick ponies and I still have a hard time understanding how these kinds of slasher movies have such extensive franchises since every film is exactly the same and if it’s not more of the “same stalking and killing unsuspecting babysitters/camp counselors” the fans have a conniption fit. But what the hell do I know? I really liked Jason X.

Whoa, I kind of got off track there… Lets get back to the show:

The real treat of the evening wasn’t the root beer float I drank, no the real cherry on top of the evening was sitting with Miss Stacey Nelkin and watching her stellar performance in Season of the Witch followed by a Q&A between Stacey and Mr. Lobo. Lobo challenged the audience to come up with good questions and they did rise to the occasion making it both informative and entertaining. After the Q&A the staff of the Alamo handed out free posters for all the attendees and Mr. Lobo and Stacey signed autographs during the intermission. A couple of people even asked me to sign their posters and some artwork I had for sale!

I was so struck by Stacey — She was so beautiful and generous with the fans and I feel truly blessed to have met her.

After Intermission Mr. Lobo introduced the next movie. The rest of the line up, I must admit was a bit of a disappointment only because the rest of the films don’t feature the ultra-masculine, virile, and hard-boiled Tom Atkins… Luckily they’re great otherwise! 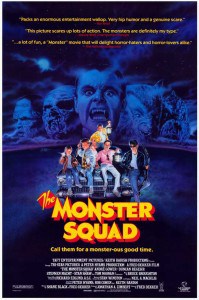 So our third film was THE MONSTER SQUAD (1987)! An excellent flick starting a bunch of spunky and good-looking youngsters. The movie is about A group of kids who are united by their love of monsters. Soon after forming a club they are pitted against the likes of Count Dracula, the Wolfman, Frankenstein’s Monster, the Mummy, and a Gillman. The kids have to work together to stop Dracula from using an ancient amulet that will allow him to take over the world.
This movie is pure 80’s fun all the way through, but I stayed in the lobby and chatted with some fans who were milling around and ordering drinks. I had a great time meeting new people and talking to fans from way back. Everyone was just so nice, but around this time Stacey was retiring to the hotel and I thought I should probably take that opportunity to sneak away myself. Lobo walked us back like a true gentleman and at the Hotel we rated the pumpkin carving contest set up in the lobby. Lobo returned to the theater to host the final film of the night: Night of the Comet (1984 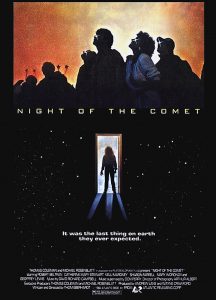 ) about A girl who chooses to stay inside at the theater where she works when most everyone else is outside viewing a rare comet which incidentally wipes out most of life on Earth in it’s wake. The girl and her sister must find a way to survive amid other less savory survivors. Another fine 80’s movie with a true cult following. People LOVE this movie and for a good reason — it’s exquisite! I regret not having the energy to stick with it and watch this final film but I’m pretty sure if I had stayed I would have turned into a Pumpkin for sure — and at this time of year? That’s dangerous stuff!

Finally I really want to thank Steve Nerangis and the Staff of the Alamo Drafthouse Cinema in Winchester Virginia for throwing such a gratifying and entertaining event.

Also a special Thanks to Matt Burns for submitting some great photos! 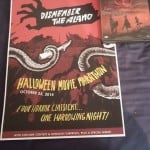 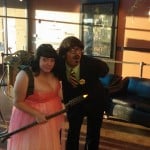 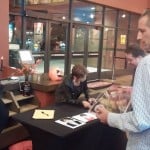 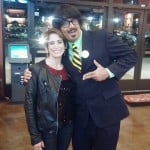 Mr. Lobo talking to a Fan 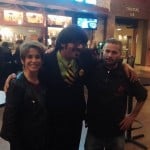