Gordon, who you should already know from his amazing work in the horror genre, like  Re-Animator, which came out the same year that this movie was made, even though this movie didn’t come out ‘til two years later. Also involved was producer Charles Band, who would go on to helm Full Moon Entertainment, and producer Brian Yuzna, who you should also already know from Re-Animator, unless you’re some sort of not-nerd, in which case, good for you, not wasting your life away on silly bits of information about movies that no one likes. Now, shut your mouth and keep reading! One of us! One of us! Mwwahahahahaha!!!! 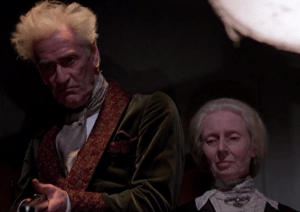 Never too old to play with dolls.

Dolls is the story of when a little girl has stupid parents and they happen to get stranded near an old house that houses old people. One of those old people you might recognize as Guy Rolfe, who later found fame in the third installment of the Puppet Master series as the complicated creator of the puppets, and made people want to see more, and why we’re now up to number ten in their sequels. He appears in Dolls as an ironically similar character, controlling a bunch of murderous dolls, which, I hope that’s not a spoiler for you, cause if you’re watching a horror movie called Dolls, you should probably have figured out by now that this ain’t about Barbie™. So, getting back to Dolls, for about a second, because it reminds me a bit of Nothing But Trouble, the Dan Akroyd movie with Chevy Chase and Demi Moore that you either know and love, or don’t know and probably wouldn’t understand. Point being, if you have car trouble in the middle of nowhere, you might as well jump off a cliff, because unless you’re a pure of heart child, and not a scummy adult/lawyer person, you’re probably not going to find anyone who’s going to help you, and they’re either gonna strip you into bones, or turn you into murderous dolls. Maybe

So besides the little girl’s stupid parents, there’s also a nice fat guy, Ralph (he’s Officer Duffy in Robocop2!) who is giving two punk girls a ride, who both turn out to not be so nice, because even alternative thinking and interesting looking people can be judgemental

dicks sometimes. Needless to say, because it’s a horror movie, things don’t go well for the nefarious females, and one of those things I said in the last sentence of that last paragraph happens to them, but I’ll let you figure that out. So the fat guy helps the little girl search for the missing girls (or does she help him?) … (yes. yes she does) and she ends up having to convince the murderous dolls to spare his life. Unfortunately, the dolls have already killed some other people, and certain other people think that other people killed those other people, so other people want revenge on other people, and Judy is stuck in the middle. What? Judy! The little girl! Did I not mention her name was Judy? Well it is. SPOILER!

It’s a great little horror movie that has the Stephen King feel to it where the children are the saviors of our tormented human souls, pretty much literally in this case. It somehow ends happily, with everything tied up in a neat little package so the little girl can go on and 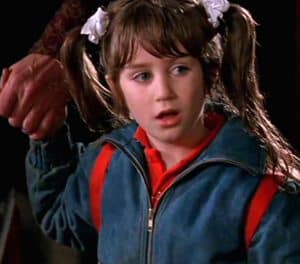 live a happy and perfect life without even having to know that her dad and step-mother’s souls are trapped in dolls that murder and enslave other bad parents for not raising their children right. What a paradise that must be. Or, some sort of horrifying movie. A ‘horror’ movie, if you will.

I feel like I should start actually drawing these hypothetical pinball machines I keep dreaming up. It’s always just taking an already existing machine and imagining the movie’s theme plastered on it and thus creating a kind of storyline following gameplay rather than all this bumping and flipping pointlessly nonsense. I always try to get a machine from around the same era, and in this case, since the movie was made in 85 (though not released til 87) I’m going with the 1986 machine ‘Hollywood Heat’, which, with its horrendous Miami Vice rip off artwork, should be obvious why I’d prefer some murderous dolls painted all over it. Also, in some bizarre way, I feel like the gameplay would be somehow fitting to the storyline. I dunno, take a look and decide for yourselves.