by CharlesHarrison | 0 Comments | November 10, 2014
I love me some DOOM. As in, the 1993 video game that in 1995, was installed onto more computers than Windows 95 itself.
Now, Event Horizon from 1997, starring Morpheus and the main dude from Jurassic Park, is absolutely nothing like the legendary video game DOOM,

Event Horizon takes place near Pluto, back in the future when it was still a planet (get it?) and is the story of what happens when humans screw with portals and contact Hell. That’s where DOOM comes in, cause that’s what DOOM is all about. In fact, Event Horizon is more a DOOM movie than the actual DOOM movie was for that exact reason, what with the DOOM movie having a portal but not using it to connect to another dimension like DOOM the video game did. Wow, I’m saying DOOM a lot, maybe I should sing the DOOM song now? Nah, I’ll save that for another day.

So in this film, we have not only Laurence (Apocalypse Now and Nightmare on Elm Street 3: The Dream Warriors) Fishburne and Sam (Hunt For Red October) Neill, but also Sean Pertwee, who, if you’re a Classic Doctor Who fan, will look very familiar, or at least his eyes and pointy nose do.

He is the son of the third doctor Jon Pertwee, and he is the only other interesting person in this film, and that’s only because of his father. I should mention, there is another actor in this film who, while having a slightly more shaved head, still throws me off throughout the movie because he acts and talks just like Sean. Maybe I’m crazy, but that shit threw me off, and like, whoever was doing casting would have not wanted that. Ok, I’m stalling. This film isn’t actually that good, in fact, it’s full of clichés and terrible characters and lots of groaning moments. Like when the characters are acting like they know they’re in a horror movie, and jump in their skin and then frightenedly asking “wh- who’s there!?” WHO THE HELL DO YOU THINK IS THERE!? YOU’RE ON A GOD DAMNED SPACE SHIP WITH ONLY 4 OTHER PEOPLE!!!! And you’re a scientist!!!! You would use logical thinking to deduce that it’s one of 4 other people and then just ignore it because it was nothing, because you’re in fucking space, with lots of gadgets and stuff in the walls that are surely making some sort of noise that you’ve learned to ignore! 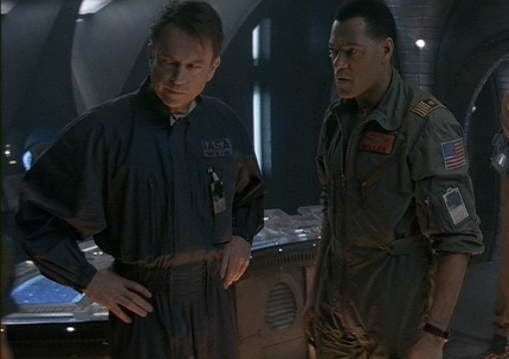 The film is set with the same “2001: A Space Odyssey rip-off but mixed with a modern horror feel” idea as Alien, only instead of “Texas Chainsaw Massacre in space” they went for a “Hellraiser in space” feel. Sooo, that’s basically taking the very beginning and end of Hellraiser 4 and making a whole movie out of it. Ahh, Hellraiser 4, which I actually kind of like for it’s explanation of the Lament Cube and for the jumping timeline and not just waiting til the end for Pinhead. But that’s another review for another time. Now I need to wrap up this review in a way that makes it feel like it wasn’t written over a four week period while I was vacationing in Bermuda. Uuuummmm, I know I didn’t really talk about what happens in the movie, but I prefer discussing the nuances rather than giving you a step by step ruining of the movie’s plot. Maybe I should just tell you why you should bother to watch this movie when it has some pretty obvious flaws. Well, there’s blood. Blood is cool, right? 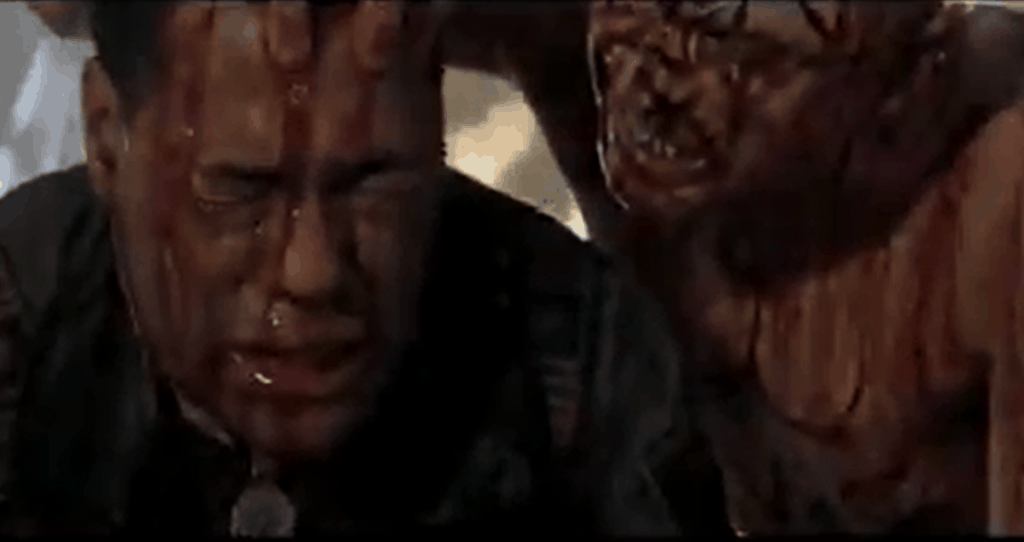