Goodnight, Karen Black. You don’t have to fight that horrible ampullary cancer of the stomach any more. Slumber in Peace. You have earned it. You have given so much to so many of us and will be missed. The popular mainstream press will tell you and tell you that she was the actress best known for her role in FIVE EASY PIECES(1970) as The Waitress opposite Jack Nicolson. Of course, she was in classic independent films like NASHVILLE(1975), THE GREAT GATSBY(1974), and EASY RIDER(1969) and won Golden Globes and was nominated for Oscars.

That is NOT the actress we are going to talk about here. Prestige and awards make a nice obituary… but to us, to MR. LOBO and DIXIE DELLAMORTO, the staff at CINEMA INSOMNIA, ZOM-BEE TV, along with HORROR HOSTS AND CREATURE FEATURES, and including all our friends in the horror and low budget genre film community…to US…KAREN BLACK was an ICON. Karen Black appeared in more than 100 films and often portrayed women who were eccentric, attractive, and in danger. We are lucky she worked extensively in the low budget horror genre.

She won our hearts immediately with the telefilm TRILOGY OF TERROR(1975). Three stories interwoven together by two other genre legends Dan Curtis, producer and director of Dark Shadows, and Richard Matheson, who penned episodes of The Twilight Zone and THE LAST MAN ON EARTH(1964).

One story is about a college student infatuated with his teacher. Next, a paranoid tale of a good sister and an evil sister, and the most famous segment, about a sawtoothed African Zuni Fetish Doll doll that comes to life and terrorizes a woman in her apartment. Karen plays the leads in all three stories…that also makes her the female Peter Sellers of anthology horror! This is one of those films that stuck into the minds of many youngsters who grew up in the 70’s…and a piece of it broke off and stayed with them their whole lives.
One of those deeply effected was Disney Storyboard artist Larry Scholl. “I think my all time favorite Karen Black moment was that split second shot in Trilogy of Terror when she is trapped in the closet, sees the suitcase, the door flings open, the doll prepares to charge, then we see that priceless shot of her looking determined…almost grinning with delight as if to say: ‘Come and get me!’ to the doll! I’ve never seen any heroine in a horror movie with a grin for a moment while being chased. It showed she had had enough! Although she was terrified she managed to do more damage to the doll in their chase! Unheard of in a horror film at that time, and certainly not on a TV movie!”

Terror struck in the skies as well in the celebrity-rich hit disaster film AIRPORT ’75. The mention of that film, parodied famously in AIRPLANE!(1980), has fans imagining Black’s frantic call for help, “This is Nancy. Something hit us! Oh, God Help us!”…

She then appeared in the Haunted House chiller, also from Dan Curtis called BURNT OFFERINGS(1976). Karen Black and Oliver Reed are summer caretakers moving into gothic house with their young son. It’s considered by fans to be one of the scariest haunted house movies of all time. The house rejuvenates part of itself with each death that happens within. And the last scene in the attic made Mr. Lobo jump. That same year she starred as a jewel thief in Alfred Hitchcock’s last movie, FAMILY PLOT(1976).

Even before these strong entries Karen did horror films. Those of you who watch the Roku channel ZOM-BEE TV may have discovered an oddity of cinema, a yawner called THE PYX(1973). Karen Black is a prostitute who supposedly commits suicide by jumping from a high-rise building to her death, and Christopher Plummer is the investigator who uncovers a strange devil cult. The film flashes back with events from the previous 24 hours, in which she is sucked into the cult by her sinister madame. The plot is slow and boring but

Karen Black is so compelling that Dixie and I have watched it 2 or 3 times now. She also sings the main theme of this film–another talent that she has brought to several of her films including NASHVILLE. Our facebook friend, Tony Howard, goes nutzoid for Karen. “I admired her mostly for the fact she did not make her own personal life, angst, whatever, part of her job as an actress. Matter of fact, I didn’t know anything about her personal life or angst. Actresses today have thrust their own personal misfortunes/addictions/egos into the limelight to the point I find them utterly unattractive as women or performers. To me, Karen was not like that. No female celebrity ever captivated me so totally as a teen/young man, and she remains a favorite, if not THE favorite woman performer for me. She was 100% woman, but she was also 100% talented performer, and that 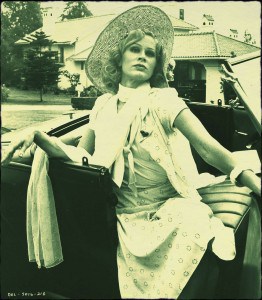 combination puts her into the same class as the most revered of any time period. I am not a person to revere a celebrity, I don’t see what others see in many of them. Karen just appealed to me in every way. There is a little known Canadian movie about a witchcraft cult known as The Pyx. Anyone who comes away not impressed with Karen Black in this movie has the emotions of a stone statue. Her career impressed someone that is almost impossible to impress, and she will go down as my favorite actress. Karen, hoorah!”

She was in one of Mr. Lobo’s favorite conspiracy thrillers CAPRICORN ONE(1977) about a faked mission to Mars and the astronauts who are marked for assasination when the empty capsule burns up upon re-entry. She was also in “The Ransom” episode of one of my dad’s favorite TV shows THE INVADERS–that was about aliens who live among us and the one man who can stop them. Karen played the dedicated granddaughter to Laurence Naismith. The original INVADERS FROM MARS(1953) is a cult classic, and much appreciated by your humble writer who saw it on TV as a small child–However, Mr. Lobo saw INVADERS FROM MARS(1986) when he was teenager–and there were no elitist film snobs around or internet to tell him that remakes are automatically bad. I loved it! The cast was great–especially my two heart crushes of the time, Laraine Newman and Karen Black. Her one-of-a-kind screen presence is as showcased here as it is in her more celebrated films. Karen’s real life son, Hunter Carson is the imaginative and brave child lead and is perfect in an 80’s way for the role. This film is finally being appreciated more–it’s an overlooked classic.

In it an evil clown stalks the women who work at a phone sex company. Karen Black is particularly great in it. And if she didn’t give it enough “cult cred” it has cameos from Divine and Paul Bartel.

And speaking of cameos,
she was also in a favorite gem that Dixie and Mr. Lobo obsess on, Ed Wood’s I WOKE UP EARLY THE DAY I DIED(1998) staring Billy Zane. It’s a holy grail VHS find for Ed Wood fans. In 2003 she was introduced to a new generation of devoted fans when musician/director Rob Zombie put her in his first feature HOUSE OF 1000 CORPSES as Mother Firefly. Zombie had this to say “She was a very special lady and I was very fortunate to have been able to work with her on my first film. She was a one-of-a-kind actress and will be very, very missed.”

Bill Moseley also had the pleasure of working with her on that disturbing and groundbreaking film and had some warm thoughts to share. “Such a sweetheart & a pro, an infectious laugh and, like me, originally from Illinois (well, I grew up there). Love & condolences to her wonderful husband, Stephen Eckelberry, her daughter, Celine, and her son, Hunter Carson. We lost a huge talent with a beautiful singing voice, a love of words and a great sense of humor. I’ll miss you, Karen.”