After fully recuperating from my full-on Bruce Campbell fest of movie reviews, I thought it time to review a movie that unfortunately does NOT star Bruce Campbell. I know, there aren’t many, or at least not that I’d like to watch, but there are a few out there. Let’s see, my last review was The Evil Dead, so what would be the next step in review evolution? Well, obviously, it’s Friday The 13th Part 2!

That’s right folks, Friday The 13th Part 2, the greatest sequel to a movie where Kevin Bacon dies (as if Hollow Man 2 was even an option). Now, without getting into any spoilers, there are some things that you should know about by now even if you haven’t seen any Friday The 13th movies, and one of those things is that in the first movie, the famous Jason Vorhees we all know and love is NOT the killer, and I didn’t even need a paternity test to figure that out. That said, in this movie, Jason IS the killer, but not the as the hockey-masked and machete-wielding (he does use one twice though) psycho we all know and love, but as the killer from The Town That Dreaded Sundown, the ‘76 version, not that it matters, but it does. You may remember Jason from the first movie as the little boy in the water in that girl’s nightmare at the end (it’s pretty telegraphed, you’ll see it coming) and now the same girl is at the beginning of this movie. Now, maybe you enjoy the events of the previous film being completely ruined in the first five minutes of this movie, or maybe you expected this film to not be a practice in torturing and disrespecting it’s own audience. Oh, silly you.

Now the part of this movie that is interesting is the fact that this film isn’t the corny stereotype characters who do incredibly stupid things that lead to their celebrated demise, but is actually a relatively decent portrayal of real people in what could be a real situation, and not some zombie killer who can teleport. Sure, it has it’s moments that no self-respecting film would portray, but on the whole, it follows the same tone as the first, and gives us a female protagonist to follow around who is relatable and not just some lucky virgin (more like a lucky un-virgin, bow chicka bow wow). She even runs at a decent pace, so none of that Texas Chainsaw Massacre fake tripping crap like we saw from Leather Face, and none of that fake Barbara tripping when they are coming to get her stuff (I’m pretty sure this actress actress just actually trips when she gets out of the car, so yeah, none of that fake stuff), just honest pursuit and attack-foiling methods that don’t feel pathetic or forced. Or, ok, maybe they do, but they’re still relatively, ok maybe, ummmm, it’s better than horrible?

“I heard your town dreads sundown.”

Look, it’s the slasher genre. If you wanna watch a film about teenagers getting chased by a guy with a pillow cover on his head, you certainly can’t do better than this film. Where else can you see a girl hide under a bed and almost escape from the killer but then pees herself because she sees a rat and the killer sees her pee so he knows she’s there and somehow, he still manages to fuck up stabbing her with a pitchfork. Oh right, no spoilers, whatever. Here’s a spoiler, the ending is a stretch. You’re either gonna laugh or be the guy arguing with your laughing friends that “Jason is like a retarded child, of course he could confuse a teenage girl with his decapitated mother for a few seconds!”. Oh hey, look, it’s that guy who we thought was dead who just appeared out of nowhere, literally nowhere. Now, another thing of note is that Jason’s method of murdering is always inventive and resourceful, but we all know and love him for his machete work. But the cover art to Part 1 (which isn’t Jason) and Part 3 show the silhouette of someone with just a big knife, as was his more common modus operandi anyways, HOWEVER, the silhouette for Part 2, while looking very similar to the first film’s poster, actually has an AXE in his hand! Yeah, an axe.

Does he use an axe? Even once?

NO. NO AXE IN THE ENTIRE FILM.

But guess what this film does have? Pinball. If your movie has pinball or cats in it, you earn a special star in my book. It also has two shuffle alleys, which, while not giving them the extra star, does put a warm fuzzy feeling in my heart, though the one had me thinking it was a pinball machine, next to the KISS pinball, and I’ve read that there is also a Pokerino pinball somewhere in the film, but have not seen it for myself. That said, go grab this film and give it a watch and tell me where it is, and I will love your forever. Peace out dawgs. 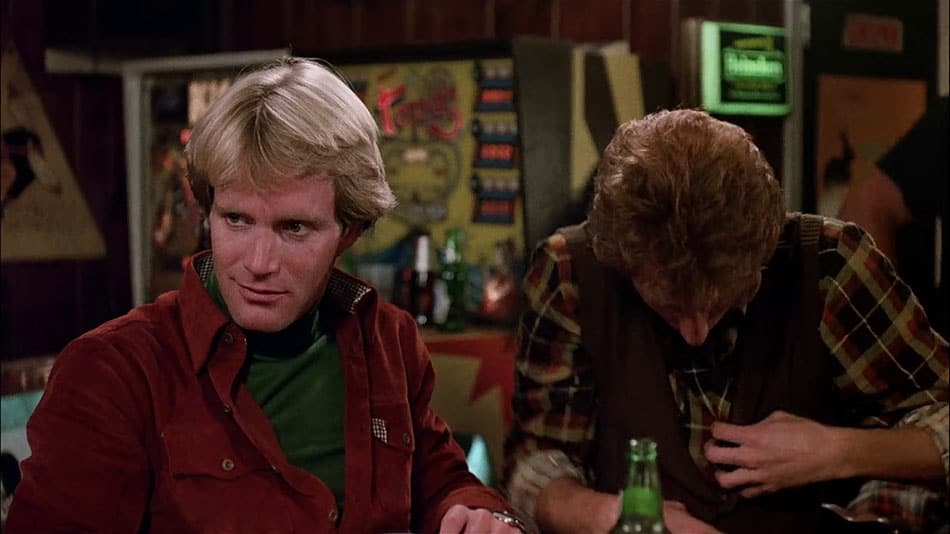