Happy Monday the 9th everybody! Right now, in some distant New Jersey shack, a machete is being sharpened, and I don’t mean that Danny Trejo is filing his nails. I mean that the boy wonder himself (he came back from the dead and can teleport, what can Robin do?! Nothing!!!) Jason Vorheez is currently probably as giddy as a kid in a candy store on christmas who is also Jesus, so, ya know, BirthdayChristmas! Actually I heard that sucks because then you only get, like, a quarter or a half more presents. Wouldn’t it be cool if your birthday was a different day each year? Like how Friday The 13th can fall in any month, and sometimes we get two! You know what? I think I’m gonna start celebrating Friday the 13th as my birthday from now on. Why not? Who’s gonna stop me?  You? Ha! Maybe this guy though…

Frankly, I’ve only seen the second one just a handful of times. Now, Part 3, on the other hand, is the Friday I pull out on most occasions that call for a Friday film. It’s the first one with the hockey mask and it’s the first one with ridiculous stereotype characters, like the stoners, the jock, the biker gang, and, of course, who could ever forget, the goofy fat nerd who can’t catch a break, Shelly. 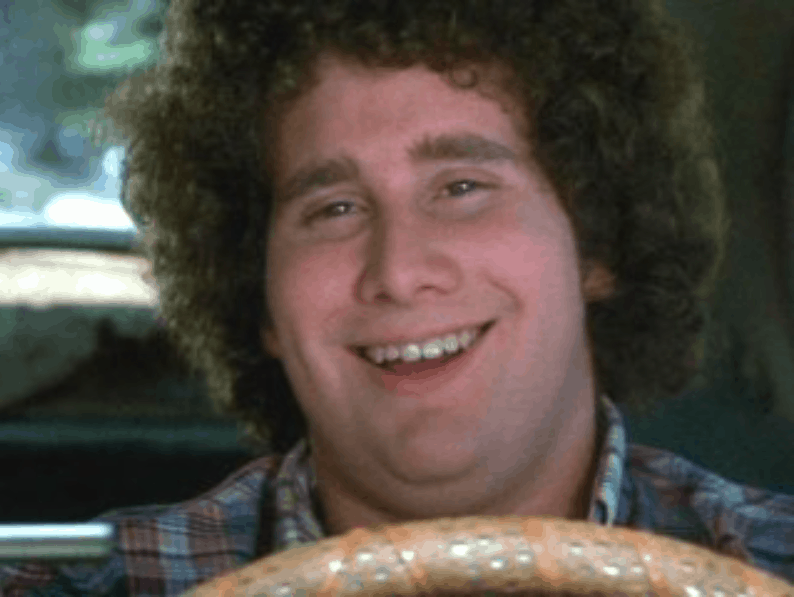 There is probably only one character in the Friday series that I will mention by name that isn’t played by an actor of note, and Shelly earns that by being possibly the greatest horror movie character of all time, with his prankster antics and soured self-esteem, he speaks to the lowly nerd in all of us, AND he just happens to be the person who supplies Jason with his trademark hockey mask. So, yeah, great character, and is responsible for one of the greatest horror mask icons in history. So in his honor, I will now sing this South Park classic.

You made me come out of my shell, Shelly
You give me strength when there was only fear
I ate at Burger King today, Shelly
And stood up to a boy who called me queer
When you pushed me off the diving board, I fell
And you make the world a nicer place, Shelly
So I can come out of my shell

Wow. That was emotional. Ok, so do you understand how awesome Shelly is yet? I certainly hope so. Okay, so let’s go over the list here. This movie has stereotype character, which is awesome and hilarious. It’s got the first time Jason wears the hockey mask. It’s got Shelly. AND, in the tradition of of the film having a 3 in the title, this movie was in, 3-D! 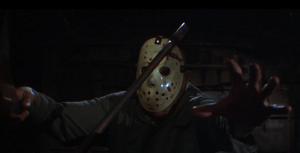 This is your Jason.

Which is just great for all those stupid shots where they’re just trying to make use of the camera. Really, the camp value of this film is off the charts, because these films are just beautiful excuses for cheap gimmicks. Did you know (I’m talking to all the nerds who know this movie in-and-out by now and are just reading this review while nodding their heads, but all others, please, continue reading) that the opening of the film, which features decapitated Jason Mommy on a table in a zoom in shot, was going to have her open her eyes at the last second? Really, everybody go watch so you can see what I’m talking about, because it’s pretty hilarious, and you can tell that this zoom in shot stops right before this severed head was supposed to open it’s eyes, but instead, a big 3 and a D comes out of her closed freeze framed eyes. Apparently audiences laughed too hard at the opening eyes from a rotting head, and someone was like “Fix that Now!”

So if you noticed, I haven’t touched on the plot of this film at all. Am I trying not to spoil anything for you? No. You already know the entire plot of this movie, so don’t be a smart aleck, and stop asking the wrong questions. The question you should be asking, is “Hey, so I noticed that whenever I see Jason in popular culture, his mask has this huge cut in, on the top left side, so what’s with that?”

Well how observant of you. That would be because in this movie, towards the end, he gets an axe to the head, which, obviously, barley affects him at all. I love it though, because for all the wardrobe changes this guy makes from movie to movie, whether it be yellow gloves or a different color jumpsuit, they still always remember to have a mask with the huge gash in it. It also just looks way cooler. And really, that’s the most important part of the ending of this film, because who gives a shit about who survived and what was left of them? It’s more satisfying to see that axe hit his head, and know “yup, that’s gonna leave a mark.” as opposed to every other thing they do to the guy (how many eye gouges has this guy been through?).

Now, I probably said this in my review of Part 2, but the fact that there is no Friday the 13th pinball machine is just criminal. There’s a Freddy one, a Frankenstein one, a few Dracula ones, a Phantom of the Opera one. Ok, so there’s no Halloween, Texas Chainsaw Massacre, or Hellraiser pinballs (Phantasm would be great too) either, but I still think it’s unfair. I just played the brand new Ghostbusters pinball machine, which is about 32 years late, but as Cheech says “better late than never.” and it’s fantastic. With The Walking Dead pinball machine also being a fantastic make, my heart burns for a Friday Machine, and something better than this home-brewed online piece of crap.