Friday the 13th: The Final Chapter

Happy Friday the 13th everybody! A day made famous by superstition, fear, and jealousy. Ok, not really jealousy, but Christopher Lee demanded I finish the quote. So whether you celebrate by crying in a corner and worrying about your lack of luck for the day, or if you’re just going to drink white wine and eat shrimp all day, I raise my glass to you, person who cares about an arbitrary date that affects nothing. Well, isn’t that all of us? Actually, there’s a thing here in Philly where you can get a specially designed tattoo for Friday the 13th. At least there used to be. That was 6 years ago I heard about that, but I guess getting a tattoo would be something people want to do on a day like this, so it would make sense to offer some special deal to those ink favoring friends. For me, it’s going to a be a movie night involving the exploits of a man in a mask and a jumpsuit who kills horny teenagers for fun, and isn’t the son of Norman Bates‘s first victim, or a huge Star Trek fan. Actually, I’ll more likely be watching Mocking Jay Parts 1 and 2 tonight, since I rented both of them two nights ago and really need to return them soon.If you’re going to watch a Friday the 13th film though, you could do much worse than The Final Chapter. That’s right kids, here it is, the end-all story finalé edition of Jason movies. This 1984 film put a nail in the coffin of the series and Jason Vorheez was never seen again.
BWAHAHAHAAAAHAHAArHAHHaahahhahahhhhAHAHHAsHhahahhhhaHHahgHA
Ok, so they were a little premature in the titling of what is the 4th in a 12 film franchise, but much like how Spinal Tap probably inspired more bands than they made fun of, the Friday franchise just intensified it’s insanity as it went on, along with the genre of slasher flicks that had exploded onto the market, which Jason was arguably the masked face of at the time. So this was understood and the morality of the producers and writers actually prevailed against the idea of continuing this horrible smudge on Paramounts Studio’s record and decided to end it all, with one glorious goodbye film that, along with Part 3, is one of the classic Jason movies, what with Parts 1 and 2, not having the hockey mask, and Part 5 being a totally disgusting piece of crap that you will never, EVER, NOOVER, NOTVER, see me review on this site, so help me Satan. So these two flicks get to be definitive in a mess of good and bad on either side. Did that make sense?

Ok, now to the meat of the deal. Not only do you get everything I just said, but this movie also comes with a free toaster!!! No. Actually, this film has 3 things that are much better than that. Tom Savini is back from the first movie to bring more creative deaths to actual celebrities who happen to wander into these films. Well, Kevin Bacon is the only A list guy in ’em, from the first movie, but I’m a bigger fan of Crispin Glover and Corey Feldman anyway, and this is right before both of them both of them were big names. Er, well, let’s say they were names that some people knew, like me. If you aren’t me, then maybe learn to click and read, silly face. Isn’t the Feldman legacy enough to get you excited enough to read more? 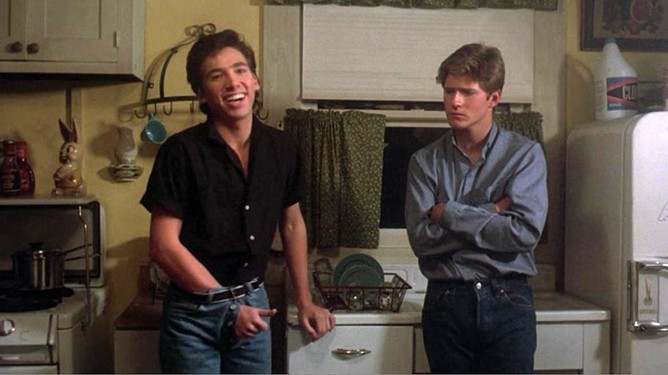 Crispin is not amused

Oh man though, Crispin is great. I didn’t realize it was him the first time I saw this, but you immediately recognize him as a huge weirdo who makes some weird acting choices. His dance in this makes David Bowie dancing with puppets look like the Elaine(sweet fancy moses). Was that an insult or a compliment? I have no idea.

Corey gets to be the hero AND shave his head, so, win win for him. I’m hoping I’m not ruining anything for you here, because I’m not, but Jason gets killed in this one (Final, get it?) and everyone knows that when a kid kills a killer, it turns them into one too. Right? His character gets to live on through the next 2 movies, and for some reason, everyone acts like this kid turned hero is gonna go nuts and start killing people, just like the guy he killed. Hasn’t that happened so many times? I know if I ever came across a kid who lived through a horrible experience and had to kill some serial murderer, I would act like he was a menace who can’t be trusted. I tell ya man, the fuzz be hammering down on non-violent drug offenders and little kids who hit mentally impaired murderous goalies in their heads with machetes. 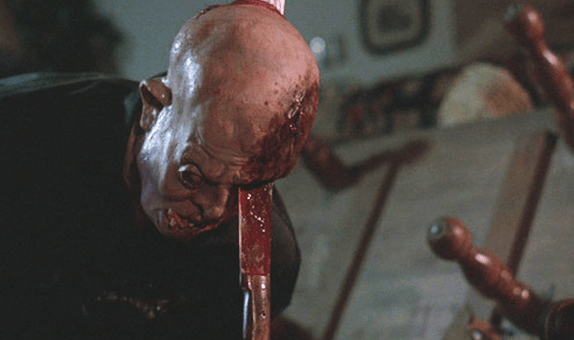 So, again, I don’t bother with plots or character’s names in Friday reviews, because, they’re totally irrelevant to the movie itself anyways. All you need to know is that this is one of the good ones (not that it ever tries to stop the bad ones, so, can you really say it’s one of the good ones when it’s brethren are so bad? I’ll leave that discussion to the BlackLivesMatter protestors) and it’s ending leads directly into the story of the next movie, Jason Lives. “but Fred, Jason Lives is Part 6 and that would mean you’re skipping Part 5” YEAH, THAT WOULD MEAN THAT, WOULDN’T IT!?!??! Oh man I hate Part 5.

But I looooooove Corey <3