Look Out! It’s The Ghouligans! Misunderstood Monsters Looking for a Place in This World!

Home » Blog » Look Out! It’s The Ghouligans! Misunderstood Monsters Looking for a Place in This World!

This is a critical review as well as a general article about these “cool” creeps and the challenges they obviously face. With decline of broadcast and DVD, the stranglehold of corporate media, the glut of amateurish horror content on the internet, and the attention span of the average monster kid diminishing to about 4 seconds…a lot of you reading this may have yet not taken the time to actually watch THE GHOULIGANS!

We’ve had the DVDs in our possession for some time. Why did it take us so long to check it out? Mr. Lobo saw some of their old black and white stuff, with the now absent Count Farnham, years ago and liked it. That was THE GHOULIGANS!(2006) B&W DVD, 60min. As an independent producer myself, I often deal with the reality of my peers and potential fans–who really love the idea of my show–putting off actually watching it for months or many years. Is it fear of disappointment? Is it ADD? Is it Jealousy? It’s understandable–Who doesn’t secretly want to do their own comedy-horror show? Is it “not wanting to have to look the creators of the show in the eye” at conventions or shows and tell them the truthfully how they feel about what is obviously a back breaking labor of love. Many fawn all over the plight of the independent film director but few share that same support for independent TV producers. It’s not as simple as that old saw,

“SyFy Channel should pick them up…”

The technical and legal hoops one must jump through to get on network cable are discouraging to say the least.

Even with the potential “Bro” vibe, it’s balanced with some heart…and it’s very often smart in it’s knowledge of the genre and in it’s satire. Mr. Lobo had grown up watching Filmation’s THE GROOVY GOOLIES–a spin off of SABRINA and ARCHIE from the comics, Hanna-Barbara’s THE DRAK PACK and both the Saturday morning version of MONSTER SQUAD from the 70’s and the Fred Dekker film of the 80’s… 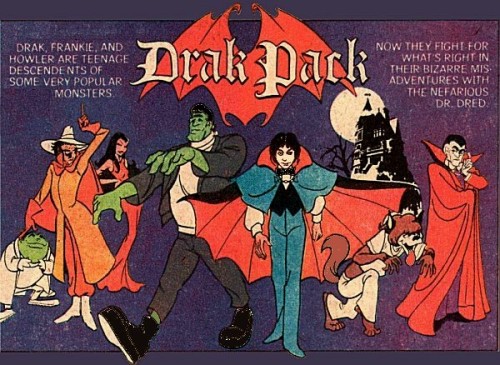 featuring good guy versions of classic monsters. The SLACK PACK, the team behind THE GHOULIGANS!, had a lot of burned in memories to compete with! To make this review process even more complicated, we’re also big fans of our long time friends and colleagues from GHOUL-A-GO GO, also from New York, who have a long running black-and-white show featuring mon 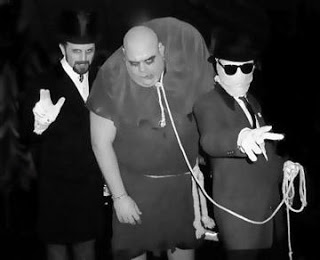 sters hosting a kiddie show. In the interest of full disclosure, you must also consider the bias that Mr. Lobo produces and hosts his own show CINEMA INSOMNIA. However, it was fun, over the course of all the THE GHOULIGANS! episodes in this mini-series, to see them find their own thing and set themselves apart from the influences we all share.

This show is incredibly ambitious and kudos to everyone involved in this homegrown Independent series.

These guys are horror heroes. When you watch you sometimes forget that they are up against a lot and this is an amazing undertaking for such a low budget show! Everyone must be doing the work of 10 people and you can sometimes see the seams as they lose focus. The make up effects range from brilliant to barely passable. Sometimes it’s unclear–Who is their audience? The humor is often too adult for kids and too kid-like for many adults. Is it a struggle to find their audience? A struggle to find their own voice? Or just a reflection of the many different personalities involved?

On the plus side–there is something for everyone.

Whatever the case may be, as a viewer, you are always rooting for these guys and you always want to “Be True to Your Ghoul” even at times when the DVD feels like a sampler.

Let’s talk about the name for a second. For those of you who lost your slang thesaurus, “Ghouligan!” is a compound word made up from the word “Gh 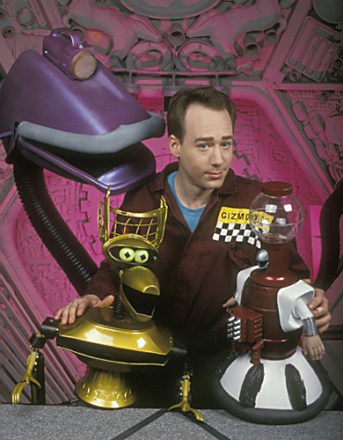 oul” and the derogatory remark “Hooligan!” Hooligan is a dated insult meaning “Thug!”  or “Troublemaker”– mainly used by old people and square adults in old movies and TV shows. However, there doesn’t seem to be many “adult” characters in their world. You get the sense that they are roommates entering middle age and their days hanging out at the malt shop or giving the crusty principal at the high school a “hot foot” are behind them. They are still binge-drinking and still trying to get girlfriends as well trying to  fit in with their monster peers.  Like in the opening of MYSTERY SCIENCE THEATER 3000–repeat to yourself, “It’s just a show, I should really just relax.”

WOLFGANG W. WOLGANG–seems the most confident and is a natural performer and as such is often doing the heavy lifting in scenes. A biker clad werewolf and selfish party animal who often gets the other two main GHOULIGANS in trouble.

BORIS STEIN–a man made monster, is established as the smartest and most responsible…but his better qualities are not always present depending on the skit. His make up also seems the most complicated and unfortunately, the most volatile. 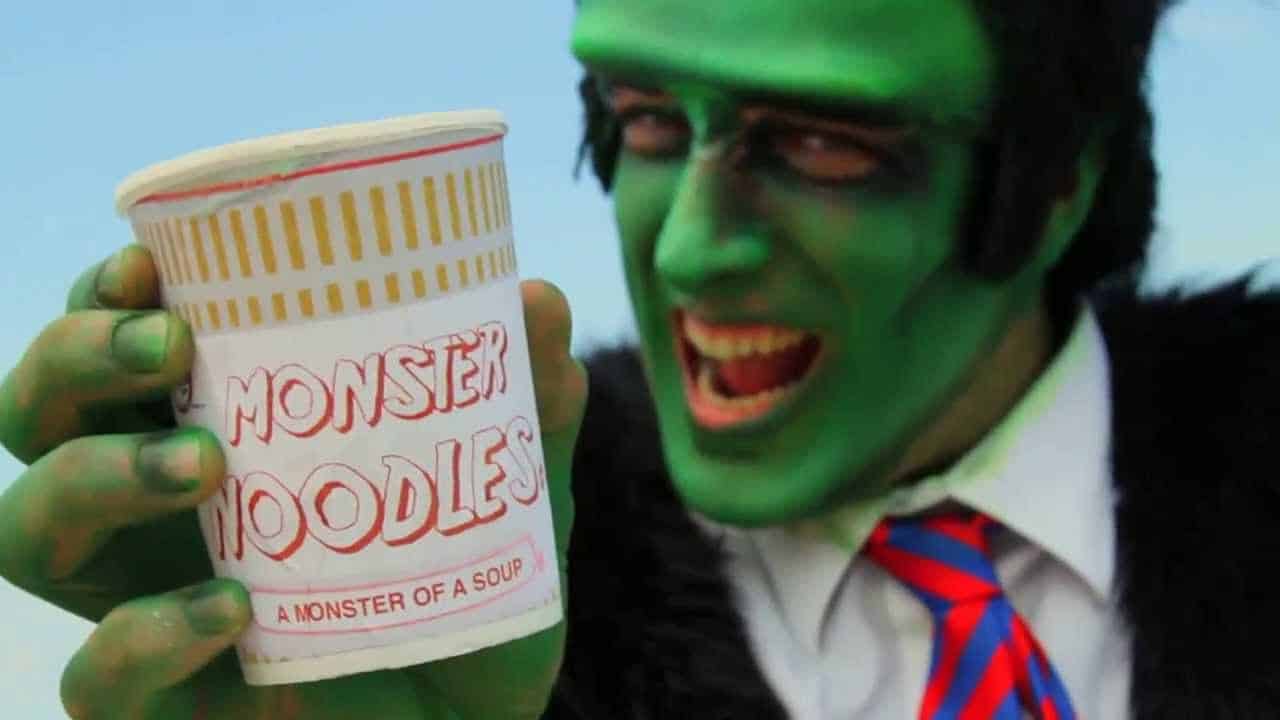 We love Werewolves and “Frankensteins”–but for us, VOID seems to be the most consistent, most original looking, and most dimensional character…a lonely, shy, blue zombie, with a knit hat a la Mike Nesmith of the Monkees .

With the first episode MR. LOBO was immediately hit with bright colors, toe-taping music, and the broad comic vibe of THE KROFT SUPERSHOW–complete with laugh track–which would seem to disappear as the shows went on. Showing their influences, second series was called THE GHOULIGANS! SUPER SHOW(Color, 42min. 2008) and seemed to have had wall-to-wall canned laughter.
This series features some very funny pop-culture references to unlikely 80’s fare like NEVERENDING STORY and black and white parodies of NIGHT OF THE LIVING DEAD(1969) and REBEL WITHOUT A CAUSE(1955).
The Second Episode, the MOMMY’S CURSE, had a very well done spoof of SCARFACE(1983)– Something for the stoner crowd, I expect. They introduced BOB TUTANKHAMEN–who in a later episode does a great fake local ad for his own Pyramid building business.

Seems like by the end of episode 2 they lost the laugh track.
There is even a spoof of masked Mexican wrestling movies in here for all you SANTO and BLUE DEMON fans.
KRILL GRILL–is another favorite character. At one point he drops his beach bum monster from the surf persona and imitates angry smoking comedian DENNIS LEARY from the 90’s. A highlight for anyone who actually remembers Dennis Leary.
Much of the writing is farcical and I found myself looking for more of a plot than the writers seem to allow. These are self aware characters doing “a show” and they seem to bounce from situation to situation like Warner Bros. cartoon characters.

The Jackass type “reality TV” spoofs of pranks played on VOID by WOLFGANG and BORIS are all funny and well done…even though it seems out-of-character for usually-square BORIS to pull such shenanigans. Like I said, there is a lot of bouncing as far as tone, style, and story. No laugh track at all in the 3rd episode but on the Second Disk in the 4th Episode the canned applause is back briefly and BORIS is suddenly shiny again like he was in the first episode. There are some Inconsistencies in the make up here and there–especially with BORIS STEIN and make up coming off hands and around the neck–But ALL are Very loveable though-out and all the quirks give it it’s charm.

Slimy Disco vampire COUNT FLEMING is introduced as well as some more adult humor–Less KROFT SUPER SHOW–More MAD TV. There are a few unexpected edgy Moments –like a Mexican Stand off with pistols in the bathroom with VOID putting a gun to HIS OWN head at one point. There is another bit where he actually shot himself through the head–very upsetting but somehow funny and in character.
In one episode they are leaping from world to world with a magic TV remote and my wife Dixie leaned over an said “QUANTUM LEAP references will get you everywhere!” Well, it does with Dixie and Mr. Lobo caught himself giggling, too.

Erik, THE PHANTOM who appeared in the first episode comes back…you’re not supposed to like him and you don’t. He represents the worst of the more hammy humor. On the second DVD there are more well done movie spoofs like KRILL GILL as “Bruce Gillis” in FRY HARD a parody of DIE HARD(1988).Some of the bits are a little thin and run a bit long. As much as we love WOLFGANG W. WOLFGANG–there is a George Michael music video parody that got a big laugh at first–but then overstayed it’s welcome. Their Corny humor–is self aware and addressed in one of the better fake ads from Ulcer Corp. for THE GHOULIGANS! ACTION FIGURES. It shows children doing dangerous things with the figures and gleefully watching a

s their dad is eaten by the real THE GHOULIGANS! Perhaps they made that commercial just to make it painfully clear that the shows are not intended for younger audiences.  The second disk has more gross-out humor–there is a belly busting bit with a proper English butler who throws up everywhere in a fake sit-com pilot called “HEAVESWORTH”.

THE GHOULIGANS! MINI-SERIES(2013) is full of variety, surprises, memorable humor, and remarkable production value considering it’s budget. They obviously have a lot of great people who believe in them and are helping them in their unholy quest to save comedy-horror from itself! One gets the feeling that these mad scientists are tooling and re-tooling themselves for Prime Time. Overall, THE GHOULIGANS! shows are creative, colorful, and infectious. In a perfect world, they would have a blank check and world wide distribution. For now, it is your duty to purchase your own copies of their fine work and load up on their merchandise. Look out puny humans! Here comeTHE GHOULIGANS! Go get ’em, lads!

All The Ghouligans! full episodes will be released on DVD/VOD/Streaming next summer through Wild Eye Releasing and it’s available streaming now on ROK TV’s The Monster Channel, as well as some goodies on Youtube, Instagram, Twitter, and Facebook.