Long ago, in a wondrous time known as the 1950’s, when the world had a certain glow about it (thanks largely to atomic energy), people swooned while Perry Como crooned, tuned in every week to watch the wacky hijacks that June Cleaver’s Beaver got into, and nine out of ten doctors recommended smoking. Amidst this climate, a well established comic book company called EC decided to reinvent itself. The EC in EC Comics started out standing for “Educational Comics” and printed bible stories, animal fables, and stories from history. That was under its founder, Max Gaines. After his death, his son Bill took over the company and changed the name to “Entertaining Comics” which, no doubt, saved on having to buy new company stationary. After testing the waters with new things like teen and romance comic books, Bill realized that what he had really liked to read himself as a child was horror, crime, and science fiction stories. His editor, Al Feldstein, felt the same way and  soon EC was in the suspense business. Stories of murderers, monsters, and men from Mars became the new trend in comic books and EC led the way with its three top sellers, The Vault of Horror, The Haunt of Fear, and The Crypt of Terror, later retitled Tales from the Crypt.

But there was something missing from the new books: a host. A recurring character to present the four terror tales in each book to the reader, and so, The Crypt-Keeper was brought on board. The way it went down according to the story Horror beneath the Streets from Haunt of Fear #17 was that Bill Gaines was approached by The Crypt-Keeper himself while running for his life in a sewer (such is the life of a horror comic publisher). The Crypt-Keeper practically forced Gaines to sign him to a contract so that he could present his yelp yarns in The Crypt of Terror and later Tales from the Crypt. 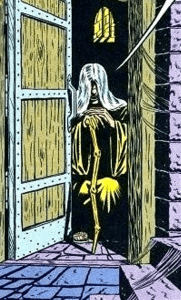 Bill reluctantly agreed and soon The Keeper was spreading misery and woe as the unofficial ringleader of the GhouLunatics, a gang of horror hosts composed of himself, The Vault-Keeper, who naturally ran The Vault of Horror, and The Old Witch, who was in charge of The Haunt of Fear (but more on those two in future articles). The Crypt-Keepers first appearance was in the EC comic, Crime Patrol #15 in which he presented the story “Return from the Grave”. In these early days old “CK” looked much different than he would later, with a curtain of hair obscuring his face and a much more mysterious, shadowy demeanor about him.

He soon came into his own though once he was moved to his own book and given free range. The Crypt-Keeper was able to corrupt a generation of kids with such classic stories as The Thing From The Grave (TFTC #22), about a love so strong that not even death or decomposition could keep it down, Undertaking Pallor (TFTC #39), about a group of boys who uncover and expose a murderous plot

involving the towns undertaker, and of course the unforgettable Lower Berth (TFTC #33), an origin tale where The Keeper elaborates on the circumstances leading to his own birth. I don’t want to spoil anything for ya, but the kind of fiends that could spawn The Crypt-Keeper aren’t exactly Ozzie and Harriett.

As the EC stories went on they got more and more macabre and they developed a signature black humor to offset this. The Crypt-Keeper, in keeping with this fun-house style of horror, began to come out of his coffin a bit more and eventually evolved into an almost jovial jester of the festering, spouting puns, donning costumes and other theatrics.

Of course you wouldn’t exactly want to pal around with the guy. As evidenced in While the Cat’s Away from Vault of Horror #34, in which two sleazy travel agents arrange a vacation for, and then try to actually rob The Crypt-Keeper. Upon arriving at his crumbling mansion, and making their way down into the crypt below…

The two jerks discover who they’re dealing with when they find out that the kinds of things The Crypt-Keeper keeps in his basement are actually THINGS, such as werewolves, mummies, and a closet full of vampires. They crawl through the maze of catacombs for two weeks dodging monsters and eating raw bats, until CK finally arrives back home to let them out.

Yes he certainly took a malicious glee in his work and it seemed like EC and their host with the most would be around for years to come, but then in 1955 when Dr. Fredric Wertham put the kibosh on the horror comic market with his own scary book, Seduction of the Innocent, The Crypt-Keeper and the rest of EC Comics returned to the darkness from whence they had come.

In 1972 a small British film studio called Amicus Pictures decided to make an anthology horror film based on EC’s old Tales from the Crypt comics and they called it… Tales from the Crypt, duh. To host the five story segments in the film (all taken straight from the comics) who else were they going to get? For the first time in two decades a new generation would be introduced to the Crypt-Keeper in live action form, and they got…This guy:
Played by actor Ralph Richardson, this new version of The Keeper shared little resemblance to the one from the comics beyond his large nose and monk robe, although, to be fair, his stoic continence does recall the more serious and mysterious personality that the character had back when he “kept” The Crypt of Terror in his earliest days. Plus, he was at least spooky in the role and he had that really bitchin’ giant skull throne thing!

Amicus went on to make a Vault of Horror movie as well (sans Vault-Keeper) and then moved away from the EC labels. The Crypt-Keeper was laid to rest once more.

Another two decades later in the 1990’s executive producers Richard Donner and Joel Silver decided to bring Tales from the Crypt to the small screen along with its signature host. Realizing that no human being could quite capture The Crypt-Keepers inhumanity, they opted for an animatronic puppet created by Kevin Yagher instead.

This version was much closer to the wisecracking clown most comic fans would be familiar with. Now given a voice and signature cackle by the great voice

actor, John Kassir, TV’s Crypt-Keeper got to host versions of his classic tales filled with more sex, language, and gore than he was ever able to get away with in the funny books due to the fact that he was now on the then up and coming cable network, HBO. He also got to interact with such stars as Arnold Schwarzenegger, Whoopi Goldberg, and the man who was death himself, Bill Sadler.

After hosting seven seasons of the television show, The Crypt-Keeper went on to host three original Tales from the Crypt movies: Demon Knight, Bordello of Blood, and Ritual (the last of which should be forgotten at all costs). Then he was given a kids cartoon series called Tales from the Cryptkeeper that saw him reunited with his old GhouLunatic pals in animated form, as well as a kid’s game show called Secrets of The Crypt-Keeper’s Haunted House. which was basically a knockoff of Nickelodeon’s Legends of the Hidden Temple, with CK acting as host while a bunch of kids went through horror themed obstacle courses.

Yes The Crypt-Keeper was quite busy in the 90’s and soon became a bit of a celebrity himself. A plethora of merchandise baring his image became available including a pinball machine, action figures, candy, t-shirts, and reprints of the old EC comics by publishers such as Gladstone and Russ Cochrane. Spencer’s Gifts even had a four foot tall animatronic replica of the host that moved and talked in case you wanted to bring The Crypt-Keeper into your home… or bed. CK also had an album of Christmas carols all sung by him and even his own rap song called The Crypt Jam.

By the time the new millennium rolled around people were more afraid of Y2K than they were anything The Crypt-Keeper was peddling. Still, he did go on to host several episodes of a radio series for a subsidiary of The Sci-Fi Channel called Seeing Ear Theatre. He was once again voiced by Kassir who lent his talents along with other notable actors including Tim Curry and John Ritter. Of a planned thirteen, only eight episodes were produced and can be found online as audio files.Soon after that, the HBO series was released on DVD which saw CK exhumed to do bit parts on the menu and even narrate short animated versions of his old comic book tales as special features on the 5th, 6th, and 7th season. The good thing about being undead is that you’ll always be there when someone comes looking to give you a job.

In 2007, a small comic company called Papercutz tried to resurrect the Tales from the Crypt series and The Crypt-Keeper along with it. They were unable to capture the original comic’s magic, or rather malice, however, and so the line folded after only a handful of issues.

What lays ahead for our favorite MC (that’s maggoty cadaver) is unclear. Talks of a new Tales from the Crypt TV Series have been circulating recently, although, rumor has it that it will not be featuring our favorite Keeper of the crypt, or any host at all for that matter…… Yeah, good luck with that.

Come what may, a character like old CK never really goes away completely. As long as we still have the comics and the movies and TV shows to remember him by, he will always be a part of pop culture and of the horror host community especially, as he was one of the very first of his kind.