House of the Devil

Home » Blog » House of the Devil

Hey, Remember the Eighties? Well, probably more than you remember Jim Breuer’s career (R.I.P.) but maybe also not at all, in which case do not fear, because me and today’s film in focus The House of the Devil (2009) are here to tell it like it is, or was, and shall be again? Haha, none of that now, I already made that joke in a previous review, and I don’t wanna start reusing old jokes here, because I don’t believe anyone should be recycling, unless you want the commies to win!!!

This Review Is Based On A Real Movie.

Follow me back to a time with bubble letters, and where yellow and orange are just lighter shades of brown. Where fashions of the 70s were still en vogue and horror movies could be just one girl and one house full of creepy things that kill you. If you’re like me, the early eighties are glamorized by their sensational pinball machines, video games, and goth music, and fashion faux pas, not to mention the full-on slasher genre blooming into irresistible and tasteless levels of imagination to produce new and more horrible images. This era also brought us sequels to late seventies classics like The Amityville Horror and Halloween, which The House of the Devil, while not in any way parodying or copying them, pays homage to them in a style that was pretty inherent of all horror films at the time. While definitely resembling films like When A Stranger Calls and others from the late seventies, the film has more of  the early eighties horror boom cheapness that gives you a campy delight. 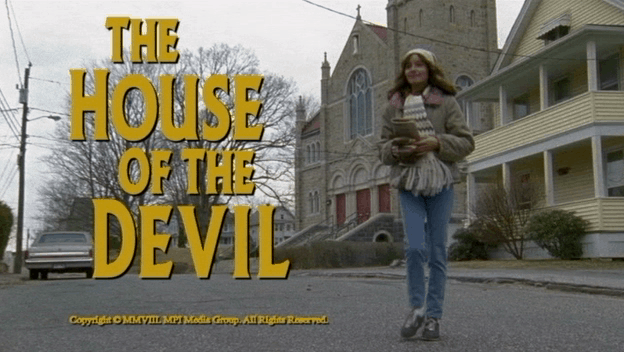 Tom Noonan is one of my favorite actors. Yes, he plays the same psychotic, murderous, child-touching freak in Manhunter, RoboCop 2, The Last Action Hero, that X-Files episode and that Louie episode, but he’s also a lovable Frankenstein in Monster Squad, and the weird counterpart of Philip Seymour Hoffman in Synecdoche, New York. Anyways, I love this tall character actor in the same way that so many of us loved William H. Macy for so long. This movie is no different from Tom’s other outings as a creepy guy every girl has the instinct to spray mace at, and he’s does his role perfectly in a character he’s been cooking for decades. You don’t need flash cuts or loud noises to scare your audience when Tom can make you feel like you’re 6 years old again, and no army of teddy bears is going to save you from his cold clammy stare of death. Lots of horror movies, or just movies in general, have a part or scene or idea that really sold the whole thing, and sparks the debate in your head between the two trolls living in your ears (past review reference, c’mon, keep up sheeple!) and for this movie it’s the great sleepover question, if someone who hires you to babysit then reveals that they don’t have a child and instead wants you to stay in their house in case their mother upstairs needs anything and will pay you 400 dollars, do you do it? Or are they going to try and use you for some satanic ritual like your local church pastor told you people are doing? The choices are yours, and yours alone! You won one pendant at the temple gates, who’s going first?

Very well Miriam, when Kirk gives the signal you’ll race through the gates, into the temple, and make your way towards The Secret Map. Hidden inside the temple are temples guards assigned to protect three specific rooms. You can trade you pendant for an extra life and go on, BUT, if you’re caught without a pendant, you will be taken out of the temple, and it will be Zacherie’s turn to enter and try his luck. If you can reach the map, all the doors of the temple will instantly unlock and the temple guards will vanish. Return throughout the gates with The Secret Map of The Bandit Queen within three minutes and you will be handsomely rewarded, and here’s how!!!

Woah. uhhhhhhhhgggg, I don’t know what just happened. It felt like I was possessed by some ancient demon named Olmec, and there were all these legends about temples that were hidden. That is, the temples were hidden, not the legends, which are just kinda not written or anything, I guess, I don’t know. It all seems to be fading now. Ok, so House of the Devil isn’t a hidden temple but it does have some spooky shit that’ll probably make a few kids pee themselves. Like all great slasher films of the early eighties and late seventies, the protagonist of this film is a girl and gets to act like she came out of a closed roller disco turned bar only with a Xenon pinball machine moaning in the background. For some, maybe it’s easier to empathize with a girl lead, but for many angst ridden male teens of the genre’s fan base, it’s seeing the perfect blonde girl who never talks to them getting her punishment for not going on a date with them. It’s always a little bit of both, from both sexes, a little bit of jealousy mixed with fear and we get to feel like normal people while watching people fake getting murdered. 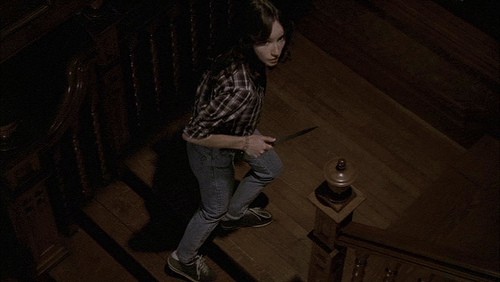 But don’t worry folks, the film never shoots itself in the head, or if it does, it survives. Though when it ends, some might hope for an omen for a sequel. But for anyone who knows The Fly II, knows that would probably be inadvisable. And no I don’t mean Return of the Fly, not that I’d be hurting it’s reputation by comparison (ooooooh, snap attack!).

Well folks, until next time, remember, when drinking blood from a skull, always put trash bags down first. Goodnite.