A California Transplant from the East Coast. She was raised by a television and some dusty old comic books — Growing up in a nurturing and supportive environment resulted in Dixie becoming a full-time artist and creative producer. She creates daily and sells her art on her etsy shop and at events. She is the editor and co-creator of Horror Hosts and Creature Features and you can learn more about her here: Meet Dixie Dellamorto!

A Sacramento born artist, writer, and comedic actor best known as the horror host of the nationally syndicated television series Cinema Insomnia which is now celebrating it’s 10th anniversary. You can watch Cinema Insomnia on YouTube! When he is not sitting in his rocking chair hosting misunderstood movies, he’s writing scripts, getting ready for the monster apocalypse, creating advertising art, collecting Ferrante and Teicher albums, animating cartoons, hunting down C.H.U.D., publishing comics and going on wild and wacky adventures with his new bride. He is the Publisher and co-creator of Horror Hosts and Creature Features and you can learn more about him here: Meet Mr. Lobo! 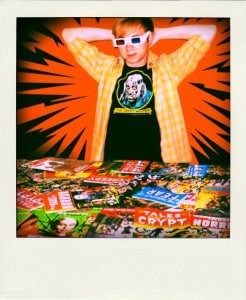 He always preferred the company of fictional characters. He looked to the likes of Uncle Creepy, The Crypt-Keeper, The Midnight Society and Elvira to nurture and guide his budding imagination in his formative years. Now an adult, or at least, adult-shaped, he occasionally draws on these childhood nightmares as inspiration when crafting his own terror tales! When he’s not rough housing with his dog roommate, or burying things in the nearby park, he contributes the horror comic related article, Comic Book Creeps: Horror Hosts In Putrid Print, to this very web-place as well as his own blog, Comic Book Crud. He also enjoys underground coal fires and long walks outside your house.

(a.k.a. Cosmic Charlie) is a Philly based musician, writer, and film buff. When he’s not petting cats, eating fried chicken or playing pinball, he spends his time watching and reviewing the most enjoyable sci-fi and horror movies around. He has a penchant for post-apocalyp-tastic films and comic book superheros with beautiful hair. He lives with his cat, Huey Lewis and the Mews.

A raven haired darling of the macabre is as fiercely opinionated as she is fiercely beautiful. She loves 80’s Horror Films, 80’s Music, and 80’s aesthetics, and is frank and brutal sometimes with the current crop of horror. She wrote some of our more popular articles including ADDAMS VS. MUNSTERS in our print edition. Uninterested in mere men, she prefers the company of mutants. She lives in OHIO in a dark apartment with thousands of VHS tapes, Monster Magazines, and disconnected phone.

He was born, raised, and works in New York where he spends his days dreaming of the perfect blazer and bowtie. All the while he survives on very little sleep, vodka martinis, and cigarettes while attending various nightlife and art events. He is an avid fan of vintage fashion, photography, and horror films. Kevin has dressed as Zacherley and even appeared on an episode of Ghoul A Go-Go. He writes the ‘A Touch of TRASH, Fearless Fashion with Kevin Novinski‘ for Horror Hosts and Creature Features, and he has also written articles for Next Magazine and GaySocialites.com which are based in NYC and is still working on completing his first erotic novel.

An artist who was born, and raised in San Jose. Her love and passion of horror and sci-fi movies along with comic books started at a very young age and have definitely been an influence on her work. As a young girl Bliss enjoyed watching Freddy’s Nightmares, Monsters, Tales from the Darkside, Twilight Zone, and Elvira. It was then that she decided she wanted to BE Elvira. When reality came crashing down and she realized she couldn’t physically become The Mistress of the Dark she settled on the next best thing… She’d draw comics! As well as taking commission work Elysium Bliss currently enjoys working as a freelance artist because it sounds so cool, hoping to one day draw her own comic book titles. You can view her work at her blog! 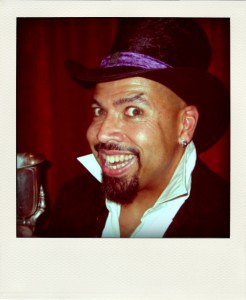