Invasion Of The Body Snatchers

Fred (Cosmic Charlie) here again but with a special review for a movie that I have chosen in order to honor one of the greatest humans to walk this earth, Mr. Leonard Nemoy. Of all the actors I have watched in film and television, he was the most, influential to nerds, like myself.

He has been, and always shall be, our friend

So, today’s film Invasion Of The Body Snatchers is probably the only remake you will see me review (besides John Carpenter’s The Thing) and could actually be considered a sequel to the original, technically, what with Kevin McCarthy from the first film still running through the streets in order to warn the masses. It also features Mr. Spock as a psychiatrist who annoys his fellow humans with logical thinking and rational explanations, but while showing some actual human emotions. It’s kinda weird seeing Leonard get mad or act frustrated or even smile, like seeing your elementary school teacher shopping at the grocery store. Also featured are Donald (Animal House) Sutherland, Jeff (The Fly) Goldblum, Veronica (The Birds) Cartwright, as well as Brooke (The Dead Zone) Adams who just reminds me of Jessica Harper from Suspira so much that it bothered me to the point of writing about it right now. grrrrrrrr.

Ok, so her forehead isn’t THAT big

We start the film with a very cool alien spore sequence that succeeds in convincing you that this is reality and not some schlocky 50s low budget horror deal. Much like Star Wars did, this film uses new and better special effects technology to convey a believable outer space that we can feel has it’s foot in reality somehow, even though their subject matter is the same as the sci-fi B-movies of the past. We also get the acting presence of Robert Duvall in a very brief cameo as a priest on swing who is the first pod person, making sure a bunch of children play with all the nice new plants in the playground. So our female lead played by Brooke Adams comes across one of these new plants and takes a bud from one to show to her dentist husband who just reminds me of Peter Dinklidge so much that it bothered me to the point of writing about it right now.

First it was birds, now this woman has to deal with aliens for the rest of her career

Now if you’re unfamiliar with the very famous and many times spoofed premise of the film and you don’t want it ruined for you, then cover your ears now! It’s the tale of these alien spores that have melded with plants, and these plants make it their job to replicate and replace humans all over the world with emotionless beings. They attempt to do this covertly, but a few people notice that their spouses are acting more like vulcans than human. That’s what happens with the woman who looks like the woman from Suspiria and her Peter Dinklage looking hubby. She tells Donald (father of Jack Bauer) Sutherland’s character about it but he doesn’t pay much attention to it, after all, women are crazy, amirite? uuggghhh. So then we see another woman complaining about her husband’s lack of emotion to a man who probably doesn’t understand that to be a problem, Mr. Leonard Nemoy, playing a famous psychiatrist who enjoys telling women that they’re just being stupid and to just trust their husbands. Now, it’s somewhat unclear, or at least it is to me, when exactly Mr. Spock becomes a pod or if he’s a pod from the first time we see him. He seems to show a good amount of emotion, but that might be a skewed judgement on my part since seeing him show any tick of emotion is more than I’m used to.

We move on to Jeff (Independence Day) Goldblum and his girlfriend Veronica (Alien, The X-files) Cartwright discovering a pod person who was trying to clone Jeff, and they develop their theories about aliens and metal spaceships or lack thereof that seem to allude to their future alien encounters by ironically dismissing the very notions of such types of alien life existing. Spock continues to also ironically dismiss the idea of emotionless aliens and we get to see him make a fool of Donald (don’t call me hawkeye) Sutherland as the few remaining humans realize the breadth of their situation and start running. Lots of running. Scared and terrified and trying to get away while also trying to seem emotionless kind of running. Then there’s a weird dog with a man face that will both creep you out and make you laugh out loud (LOLing as the kids call it) as well as Donald trying to destroy the pod headquarters in one of the stupidest looking scenes in a horror movie involving an axe where his character would have been better off with a pair of scissors. 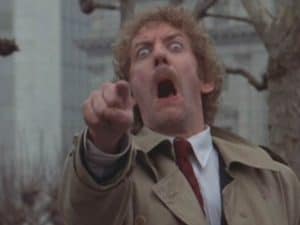 All in all, we get the fear and suspense we wanted, but the film lacks any fun. With a movie full of actors I love, I wanted more from it. And the end just wears you down so much that not even a pair of naked boobs can bring you outta the funk. I don’t even wanna think about the kind of pinball machine this movie would make, but it would probably be something like Xenon, only without the cool art or the awesome moaning sounds when you hit a pop bumper, and instead just Donald Sutherland’s hideous scream. The boring and repetitive game play would be fitting for this painful to watch ‘til the end film. It did have great art direction though, but hey, so did Waterworld, sooooooo..