Monster-Mania Con was a success!

Dixie Dellamorto and Mr. Lobo packed their bags and left town on Friday Afternoon. We weren’t sure what to expect in New Jersey, since the place is usually the butt of a joke and not a destination. After an hour in the car we pulled up to a hotel that looked like it could only exist in Tromaville… two inches of watery sludge covered the parking lot with mildly deformed ducks rolling in it. Yes, this must be the Garden State. A scary looking man pushed a shopping cart full of garbage in circles in the parking lot…

…It was probably this guy.

It was a truly terrifying sight. We cringed and thought “What have our friends at Zom-Bee TV gotten us into?” Mr. Lobo got our key and we checked into our room which — much to our relief — was absolutely beautiful inside. We got ready and left for Monster-Mania Con at the Crowne Plaza Hotel… Seven wrong turns later we were at an impressive Hotel with a huge line of Horror fans and a classic Batmobile parked out front. 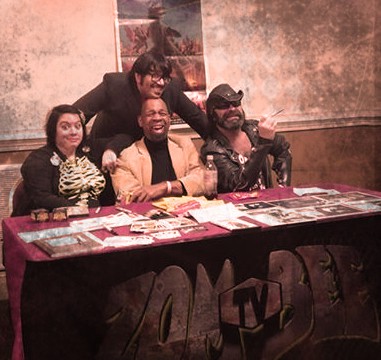 We found our friends at the Zom-Bee TV table in a side room that we lovingly referred to as a “leper colony” because it was so far removed from the rest of the show, but truth be told we got good foot traffic and shared the room with great venders and some amazing celebrities including some of the fine cast from the original Dark Shadows TV series. John Dimes, Jerry Moore, Mr. Lobo, Dixie, Dale and Andrea all took turns manning the table and meeting fans and introducing people to the Roku and Zom-Bee TV. The show was heavily attended for a Friday, though we were still able to see our friends including but not limited to the gang from VHSPS, Newt and some of his colleagues from Midnight Show, Kevin from House of Mysterious Secrets, artist Joel Robinson, Nick Lombardo, and musician/artist Stephen Course. When the convention was over for the night we ate at an almost empty diner. The fact that it was almost empty seems strange since it was called the “Crystal Lake” Diner and it was less than a mile from a horror convention where you couldn’t even walk without rubbing elbows with a Friday the 13th fan. The stomach upset we felt later would indicate the the lack of customers should have been a warning instead of a curiosity.

Saturday was a blur of fandom. All day long it felt like a subway station in an Asian country — people were packed in so tightly it was hard to breath as you navigated the halls. I think it’s safe to say it was the busiest horror convention we have attended in a very long time. 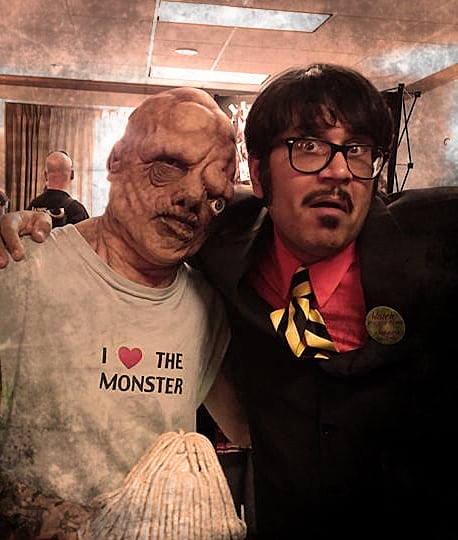 Mr. Lobo reuniting with a classmate from his Tromaville High days.

We saw so many more fan and friends. The crowd was overwhelmingly pleasant, we also made new fans and friends all over the place. It was like landing on a planet where everyone has something in common with you. It was pretty neat. Dixie and Mr. Lobo even met a fellow Popcorn fan and were excited to hear that she’s working on putting out a much deserved Blu Ray of the movie! We saw lots of amazing costumes on Saturday. Jerry, John, and Mr. Lobo took to the halls to interview guests, celebrities, venders, and attendees.

That night after the vender rooms were closed the party started. The lobby was packed with people in party mode. The hotel lobby was a sight to behold — a circus of serial killers, clowns, drunk people, steam punks, children and women wearing very little. One man we sat next to was so far gone from drink that he couldn’t talk and when asked if he was okay, pretended to be superman. Later he held his hand up for a high five that would never come. It was funny… in a tragic way. Like a hobo clown…. and speaking of clowns…. Dixie Dellamorto says,
“I think it’s safe to say I would be happy if I never saw another clown again.”

While the boys were off interviewing interesting looking people a high pitched chirping started and lights flashed all around. We looked around the room in confusion… We were confused by the sound, confused by the lights, but mostly confused by the fact that no one else seemed to see or hear them. Even the staff seemed to be ignoring what was obviously a fire alarm. No one moved and everyone kept drinking. This went on for about ten minutes until a very nervous looking member of the Hotel staff began screaming in our faces that we had to evacuate. He said the same sentence five times: “You Have to Leave out the front door, we are evacuating the building during the investigation” …as if we were going protest. The drunken deluge of party people spilled out into the parking lot like the blood from the elevators in The Shining. People aimlessly milling about in a daze until the fire company showed up! The crowd went wild. It felt as if we were transported to a stadium during a sporting event, the crowd chanted “USA, USA, USA, USA” in the glow of the flashing lights of the truck. Shortly after the Fire Department filed into the building, the Ghostbusters pulled up in the a car decked out like the Ecto 1 with their own set of flashing lights and a sound

system blasting the Ghostbusters theme. Those guys sure know how to make a disaster entertaining. After the fire department gave everyone the O.K. to go back inside the parking lot quickly became a cold wasteland, the only thing that could be heard was traffic and mutant ducks honking in the distance. We had about enough of Saturday so we packed up our gear and went back to our hotel room for some much needed rest.

Sunday was a bittersweet day because it meant saying goodbye to our friends and what ultimately was the most fun we’ve had in recent memory. However there there were three happy things about Sunday.
One: Our friend and talented artist David G. Hardy showed up with his lovely wife Tracy. 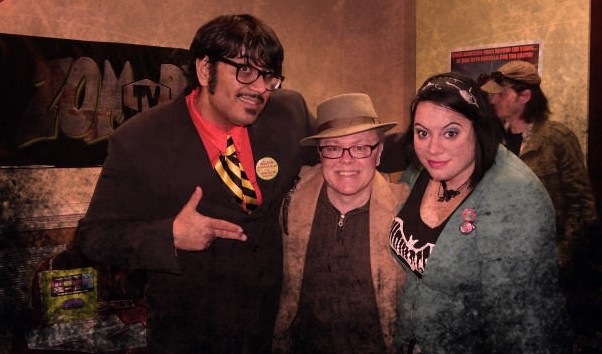 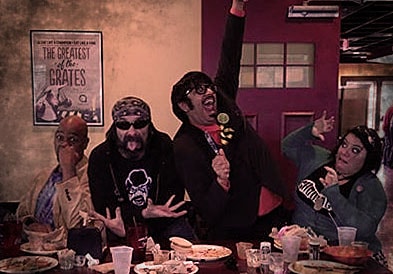 Two:
We got to break bread with John, Jerry, Dale and Andrea at what was probably the best BBQ place we’ve ever eaten at — The Whole Hog Cafe.

And Three:
We got to go home, look at all of the neat things we picked up and sleep in our bed!

A Huge Thank You to Pine Bros. who sponsored our trip, Zom-Bee TV, and the organizers of Monster-Mania! We had a great time!