My Name is Bruce

Home » Blog » My Name is Bruce

It only makes sense for an actor who has

made a living playing practically himself in every movie to make a film that plays with the fourth wall. My Name Is Bruce is less like Being John Malkovich and more like Jay And Silent Bob Strike Back. It’s the goofy answer to all the goofy characters Bruce has played with such unabashed hamminess and a Han-Solo-like charm. Maybe you’re not a fan and you find this kind of Peter Venkman attitude off-putting. Well, too bad for you, Mr. “I’m so fancy you already know I’m in the fast lane from L.A. to Tokyo”.

It all starts with some kids in a car talking about the one’s love for Bruce Campbell movies, because one out of every two kids are Bruce fans, and that’s a statistic I didn’t just make up or base solely off of the opening scene in this movie. It’s a great opening scene and allows you to feel like Captain America in The Avengers where you can actually understand the things they’re referencing! Some cheap laughs abound as Bruce acts as a brutish version of himself in an over-the-top, self-deprecating smorgasbord of Three Stooges inspired comedy that’s a little too much to bear, but entertains sufficiently. Maybe it’s all a little too Last Action Hero in it’s delivery, but maybe that won’t bother you. I mean, I hope that won’t bother you. Like, c’mon, lighten up man, what the hell? 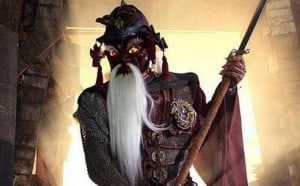 t all starts off great, like a new version of Fright Night taken right to the edge of good taste and then shoved off with a bulldozer. No vampires in this deal, just a Chinese angel of death that chops people’s heads off before the main character (the one who isn’t Bruce) can get a little action. Obviously the next step you take when your town is being haunted by a demonic Chinese angel of decapitations is to call Bruce Campbell, what with Vincent Price not being alive anymore. Bruce doesn’t get that they’re serious, and they don’t get that Bruce is joking, and traditional movie misunderstandings abound until the goings ons are made obviously out of Bruce’s comfort zone. Then it turns from schmalzing to yelling as our hero’s demeanor turns sour as he comes face to face with the evil he’s only ever really faced when it was Ted Raimi dressed up in drag.

The film falters around the latter part where it goes from being a send up of trashy bad movies and instead just starts being a trashy bad movie itself, focusing on bogus love chemistry and bogus rises to nobility that no one asked for and no one cares about and were just forced into a script that spent 60 pages not giving a crap. Nobody came to this movie to see an exaggerated Bruce Campbell character find meaning and reason in the world that has exaggerated and meaningless characters fighting a bizarre, mystical creature from a cave (mineshaft, cave, it’s all holes in rock). I dunno why they didn’t stick it out to the end with some crazy and cooky ending that would make everyone laugh and cheer and not take itself seriously at all, but whatever, what’s done is done and it’s still a great movie despite it’s lackluster climax.

Pretty sure this is how he spends his days

Just like Man With A Screaming Brain, this is another Bruce-helmed venture, because of course, who else could direct Bruce starring as himself? In fact, the small town in the film was a set that was built on Mr. Campbell’s actual home, on a large empty part of his ranch property. If it had been me, I’d have made the film about a haunted water park and build one of those on my property instead, but then again, I’m smarter than everyone else in the world, so, it’s cruel of me to expect others to match my level of wisdom. They do their best though, god bless ‘em.

Holy Cow, ONE MORE REVIEW TO GO!!! Which Bruce Campbell starring film will be our grand finale? Mercy me, I do declare, the suspense is enough to send one into a fainting spell.