Night Of The Creeps

Home » Blog » Night Of The Creeps

When Zombies conquer the earth, will it be from a virus or a voodoo curse? Hell, maybe it turns out we all shoulda been eating kosher. So what about that other idea you had, the one about it being from alien slugs from space, that are slugs? Yeah, I know i know, you’ve seen them in every blockbuster movie, from The People vs. Larry Flynt to Man on the Moon and then, umm, well whatever else Courtney Love was in. But if you ask me, and you haven’t, but this little gremlin sleeping in my ears has, I think Night Of The Creeps best represents this genre at it’s full potential.

So beyond its zombie alien slug exterior, beats the heart of a film made with post-­modern (I sound cool when I use that word) elements, revisiting classic horror staples in a tongue-in-cheek, “let’s have fun” kinda way that was becoming prevalent in the eightites horror genre. It starts with an homage to the black and white early slasher films involving premarital lovers out for a night smooch. I’ll let you decide what you think happens to them.

Flash forward to 1986, or, the present, as it was and shall be again (seriously, look at the kids these days and the things they wear. oy vey!) you’ve got a dork, and a Robert Downey Jr in Back to School type dork, but with crutches. For some more little homagey fun, make sure to listen to everyone’s names, especially the last names – there are some nods to the likes of George A. Romero, David Cronenberg, James Cameron, John Carpenter, Tobe Hooper, John Landis, Sand Raimi, and Steve Miner (guy directed the first three Jason movies). Check out that list, it’s almost too much, but then Dick Miller shows up, and everybody inside my head cheers!

But the real star of this whole movie is the hard­boiled cop, played by 80’s mainstay cop actor Tom Atkins. Yeah, he’s in The Fog and Escape From New York for Carpenter, then in Creepshow, again with Adrian Barbeau, but now directed by George Romero. The the love­-it-­or-hate­-it Halloween III, and after Creeps, did Lethal Weapon and, one of my favorite bad movies of all time, Maniac Cop. I love this guy. I could watch him forever. He shines in this movie, like a sun crashing into another sun at like, 100 kazillion miles per hour, and they’re both covered in sparklers. He’s so entertaining. Please, if you’re watching this and finding the 80’s kids to irk you, just wait til Tom, he ain’t gonna let you down.

And this film finally answers that age old question that I know many of us have held in our hearts for many years. That is, can a nerd look cool in a tux with a flame thrower strapped to his back? 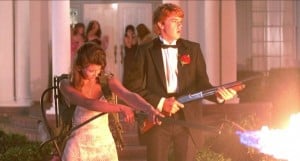 Though honestly, I’m not sure i agree with that verdict.