John Carpenter is a man whose name could be a synonym for “infallible in the 80s.” There is not a single misstep in this man’s catalog of films, as long as you’re wearing your blinders that don’t allow you to look outside of the 80s. You’re allowed to peek into his late 70s work, but for the love of Dog (I love dogs), tread carefully through his 90s work, lest ye have a true thirst for horror and can stand levels of lame acting and Marilyn Mansony type over-the-top-ness that ran rampant throughout the 90s. But from The Fog to They Live the guy pumped out some of the greatest examples of 80s horror you can find from simply one director. Today, I wanna take a look at probably his least popular film of this period, Prince Of Darkness.

Speaking of Marilyn Manson, if you get a hold of his cover of Down In The Park, you can hear it start with a clip from this film. Also relating to heavy metal men in make up, the great Alice Cooper has a little bit in this film as a homeless man who gets to stab 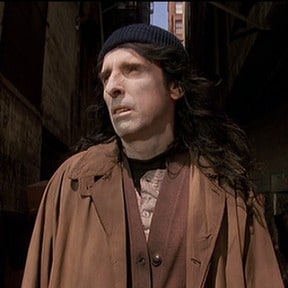 somebody using one of the props from his stage show (he liked to die on stage a lot, it was cool, still is). But what is this film outside of its connection to rock n roll superstars? It’s the most subtle film in the John Carpenter collection.

Maybe going into this film, you had expectations about it, and maybe it won’t live up to those. You knew Carpenter for his crazy and terrifying adventures through the majesty of his imagination, and now, you are faced with a bleak, boring, uninteresting environment. Now, you can look at it as a budget-saving technique, or you can say that less is more, and that the film is rooted in a reality closer to our own than films like Escape From New York or Big Trouble In Little China are. It serves a purpose, as this film gazes into the undiscovered, the unanswerable, but the almost undeniable otherworldly realms that exist beyond our own, and weaves its own explanation of the wheres and whys and hows.

We get the old bald white guy from the Halloween movies, and the old Chinese guy from Big Trouble In Little China, along with the younger Chinese guy from that film, and then a bunch of actors you will never see anywhere else, and you probably won’t want to.

They find a weird looking barber shop pole that after a few scientificy type tests, is determined to be like some sort of dark matter thing that is the source of all evil on Earth, despite being contained for thousands of years, with a few hundred of those being in this church that looks less like an old church and more like a bank that became a church, but I’m not gonna go into the poor choice of location, let’s just focus on who this film is for. It’s not for horror movie fans, per say. I’d liken this film to the Exorcist, which is a legendary horror film that I found utterly boring and at points, hilarious. But, if you’re part of the crowds of people who believe in the devil and at least some of the Bible, this film should leave you shaking in your booties.

Part of the plot is a love story that is totally unconvincing, as you really get the impression that this dude just wants a quick lay, and doesn’t do anything to make us care for or even respect him. I mean, he’s got a mustache, ew. But you do feel the impact of one of the character’s sacrifice at the end of the film, which, I don’t wanna give too much away about, but it’s damn good. Another damn good and haunting aspect of the film is the idea of messages being projected back in time into the dreams of people who are sleeping in a certain location. In this case, a warning about the end of the world and the coming of the antichrist, coming from the year 1999. Hrmmm, maybe Marilyn Manson was the antichrist? Go figure.

“I have a mustache?”

OK, I hear you all screaming, “Who cares about the film, tell me if it would make a great pinball machine!!!” To which I must say, that this is probably the most un-adaptable into a pinball machine film that John Carpenter ever made. That said, I wouldn’t mind turning a Family Guy pinball machine into a Prince Of Darkness pinball. Look it up and see if you can tell why (hint, the Pawtucket beer can could very well be the evil barber’s pole, which they call an ‘orb’ in the film despite it not being an orb). Also, the Family Guy art is boring, and it would look much better with a bunch of 80s-ish looking stuff and a horror theme, I mean, duhhh.