This is NOT child’s play.

installment in what can be considered one of the all time greatest collections of hits and misses of sequels in film history, Puppet Master. Not as easy to calculate as the Paramount Star Trek movies (odds=bad, evens=good), but still a debatable line of good and bad that separates fans and haters alike. Though the third movie is widely considered to be the best of the now ten parts series, the first two aren’t without their merits. I’ll be focusing on the first film here, but don’t go far, cause I’ll be sure to hit up the other installments soon enough, despite their varying horridity and disregarding of different story elements . 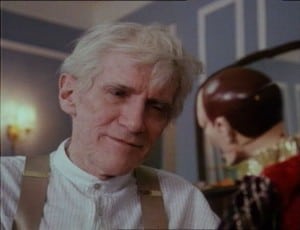 We open with William Hickey as Andre Toulan in 1939, who becomes the antagonist and then protagonist of later films, as well as being played by a different actor. Hickey you will recognize from many films, but to me, he’s the grandfather from National Lampoon’s Christmas Vacation as well as the drunk in the bar in Mel Brook’s The Producers from 1968. We don’t see much of William, as he never appears after the opening scene. Same with a puppet credited as Shredder Khan, who doesn’t appear in the rest of the film, or ever again in any

other films! I bring that up because I saw these movies out of order, and this film is actually the last one I got my hands on, so part of me was flabbergasted by this introductory puppet who I’d never seen before! I seriously want a new Puppet Master movie “The Legend Of Shredder Khan” because of how intriguing this lack of development is to me. The other puppet we meet to start off with is Blade, who is pretty much the star of the whole series, and whose origin is properly explained in the third film. Watch for the bullets in his eyes that pop out on occasion, as I believe the mechanism that did that broke after this film and was thus never used again in the sequels. 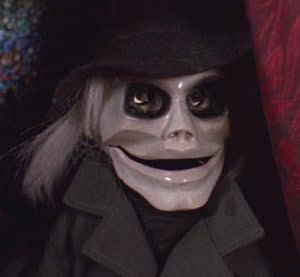 So we flash forward 50 years to 1989, where a bunch of psychics have been summoned to this mysterious hotel by a former colleague who they all assume has discovered Toulan’s secret of bringing inanimate objects to life, as well as resurrecting the dead. Despite having, or perhaps because of, terrifying dreams and premonitions about horrid goings ons at the hotel, they all show up only to find out their friend has bit the big one, but not before taking a wife, who everyone is a little skeptical of. So we see a bunch more crazy psychic stuff that puts the film in a fantasy realm and properly allows us to disconnect it from our mostly scientifically sound world.

Not wanting to give the rest of the plot away, I wanna tell you about a funny thing that happened with horror movies at some point in the mid eighties and continuing heavily into the nineties. The inclination to find the horrifying killers of the film, such as Freddy or Jason, to be enjoyable and almost cute, and instead make the victim characters into unlikeable jerks so we’re happy when we see our 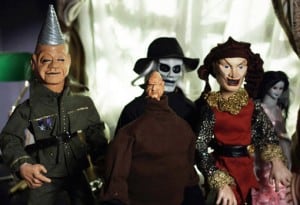 villain/hero(s) do them in. Such is the case in the puppet master movies, with what can be very creepy dolls, also being able to steal the scene and be far more interesting and empathy invoking characters. It’s not just them being cool looking dolls, but as puppets, they are slaves to a master, and thus can have the blame taken away from their actions. As well as the fact that they’re the only recurring characters throughout the series and allow us to follow their evolution, across the fractured timeline of the canonically-ignorant series.

So while the film operates on its own without a need of the puppets, their appearance, and obeying their master, and killing, provide the meat of the film and an awesome ending to what could have been a boring movie about psychics. You get the feeling that somebody merged two scripts, but it’s not distracting or

hindering to the enjoyment of what you already know is a B-level film. It does make you wonder why Toulan wouldn’t have used his resurrection on himself. Well… maybe you’ll get the answer to that in another review, or maybe you should go rent/buy all ten movies and binge watch them so you can solve that mystery for yourself. Oh, and as for the kind of pinball machine this movie, combined with all the others, would make? Quite possibly the greatest horror themed pinball machine of all time. I can’t even begin to theorize all the features such a machine would posses. Dear god, you’d need a feature for every puppet, and probably more than could fit on a machine but still satisfy my need to include all the elements of the series. Oh man, I’m gonna have to think about this one, I’ll try not to drool too much. 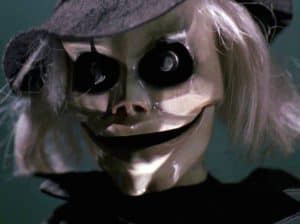