After a weekend spent in beautiful Crystal Lake, New Jersey (or Forest Green, as they call it now) I thought I’d take a short trip north to the Brooklyn-Queens border region for a bottle of Tenafly Viper, the booze with a bite. Yeah, it might be a little old, and there’s been reports of people melting after drinking it, but the same has been said about New Jersey’s tap water, so I’m not that worried. If you haven’t heard of Tenafly Viper, then you probably haven’t seen Street Trash, and that would mean your life is incomplete and that you should be really careful not to die until you can take a trip to your local movie store and purchase it from a clerk in a dying industry.

“‘Eraserhead‘ meets ‘Night of the Living Dead‘ on the set of ‘Texas Chainsaw Massacre‘” was the sentence that got me to see this movie back in the day. It stands as the king of the small genre of “Melt Movies” that came around in the late 80s, though comparing it to those other movies is a bit much. It’s a movie with no budget for actors or a script that isn’t written by the producer, but then they get it all right with the effect, set design, and the camera work. Seriously, this movie is very confusing in how you’re

watching some people who have never acted in their lives, trudge their way through dialogue written by a drunk with tourettes syndrome, but meanwhile the make-up effects and cinematography is by far some of the best you will ever see in a horror flick. Written and produced (told you) by Roy Frumkes, who also gets a cameo as a gross face melting guy, to be the ultimate offensive and tasteless movie of all time. While I don’t think he surpassed anything by John Waters (ok, maybe it’s more offensive than Hairspray) he certainly created a script that covered lots of offensive material, to the delight of subversives such as myself, and probably you if you’re reading this right now. 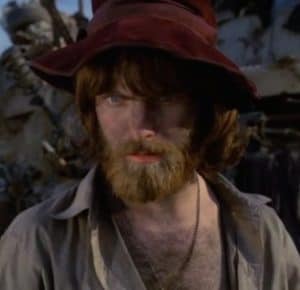 The film follows Freddy (hey, that’s my name) and his exploits as a homeless drunk on the streets of New York, with his brother Kevin and their friend Burt. Facing off against an obese junkyard owner (legendary R.L. Ryan), a street-smart tough guy cop, a Jersey Boy type gangster, and Bronson, the Vietnam vet who is in control of the Flatbush Foot Brigade, a gang of bums who live in the same junkyard that Freddy and his brother stay in, and are busy either ‘cleaning’ windshields, drinking foul liquor, or playing ‘toss the dick’, which is a scene you should not let your toddler watch alone.
That foul liquor I mention is a 60 year old concoction that a cheap liquor store owner found

in his basement, in a crate, in a crawlspace, in a wall. Not really something you should put on the shelf, but hey, it was New York, it was the 80s, so safety regulations be damned, there’s profit to be made! Kinda like Do the Right Thing, there is no hero in this movie, and it’s full of people who do not do the right thing. I can’t imagine everyone being able to get into this one, what with so much negativity throughout and things like rape and murder being treated like goofy mishaps. Actually, there are technically two heroes in this one. There’s Kevin, the young boy who has a relationship with the junkyard secretary (yeah, this movie has a lot going on, it’s like a soap opera with more melting) 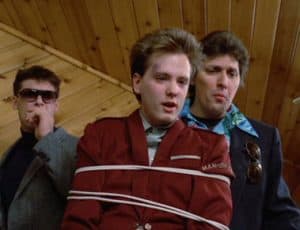 who doesn’t really do much, other than try to avoid dying. But then there’s James Lorinz,  the doorman who shines in this movie as an extra who made the right ad-lib at the right time and got himself a legit role in the film. The guy is a natural and while he’s only made small appearances in movies like this and Robocop 3, you really gotta check him out in the “oh-my-god-why-haven’t-i-reviewed-that-yet?” film, FrankenHooker.
What this movie is really about is the melts. It’s like some psychedelic dream mixed with spin art mixed with that huge wax candle in the SURF shop on the boardwalk in Ocean City NJ that’s been growing for the last 20 or more years. The melt scenes are so good

that they just make you pissed at the rest of the movie for not being exploding and melting people. Don’t worry, it’s not a small number by any means, and every melt is different and creative in it’s own right. While there are a few murders and epic fights leading to kills, the real villain of this movie gets to be an emotionless bottle of toxic ooze that, when consumed, leads to a somewhat violent ending. No, it’s not quite like drinking shots of drain-o (which I’m a total pro at) it’s more like drinking buckets of pain that gets into your bloodstream and then makes your body into a giant Gak candle. It’s a million times better than your standard blood and gore fest and 50 shades of red, and it almost makes it watchable while eating.

I could watch this movie on repeat for quite a while. I actually have, when I’ve either been too lazy to put something else on, or where I was working on something else and having this on in the background didn’t hurt for inspiration. I would kill to get a complete, 4 hour version of this, made from all the weird little side stories they cut, because this is like the film equivalent of a grateful dead song. They took this 3 minute long single, and turned it into a 30 minutes jam that just goes places and does whatever it feels like. Man I love this movie. The art in it really reminds me of the art for the brand new Ghostbusters pinball machine from Stern. Look at that slime.