What’s inside us that makes us need to vent our opinions on subjects in which we consider ourselves something of an expert on? Certainly you have to love what you’re reviewing – when it’s done well, that is. But what about those times when you go to a fancy restaurant that all your friends love and you can tell the food is done well, but it’s just not your cup of tea? Not literally, it’s not like a tea room or something. Or maybe it is. The name of this tea room is Suspiria, and while I enjoy their crumpets, I have to admit that I am left bored and unimpressed by their tea.“Woah, did he just dis Susperia?”No, I love Norwegian black/thrash metal.“Huh?”Just so we’re on the same page here, there’s SuspIria the movie, and there’s SuspEria the band, named after the movie, but with the letter change for copyright issues. And no, actually, they aren’t that good. And yes, actually, they suck, moving on then…

I don’t dislike Suspiria, with it’s vivid colors and distinct atmosphere all it’s own. Released in the same year that Stars were having Wars with each other, and directed by legendary Italian director Dario Argento, the film is highly regarded for its harsh, early, and stylized murder scene, and for the uneasy feeling the film continues to give you afterward. Now, I’m not saying that that’s all the film has, but the film’s ending is definitely not its strong point.

Let me try to explain without ruining the film for anyone who might plan on seeing it based on my glowing review (oops). The film holds a tension throughout itself like no other movie does, and if you’re a real horror movie fan and not just some freak who likes watching people murdered while wearing his mothers clothes (or your father’s clothes, if you’re an insane woman. Wait, is that how that works? Or do you just smear lipstick all over your face and say “Baby pretty now Momma? BABY PRETTY NOW?!?!”) then you know that horror is all about suspense. There’s that looming danger and you think you know what will happen, but then it doesn’t and something else does and then your little brother says he’s bored and you’re like, “Then you aren’t paying attention, spaz!”.

But for me, this film doesn’t pay off in the ways that Rosemary’s Baby or Taxi Driver does. It feels like a cheap haunted house at the end, and dampens the experience leading up to it. Yes, there are some awesome and very frightening scenes that involve maggots and blind men and plenty of spooky music with smooth camera movement, but the end of the film doesn’t fit the caliber established by those scenes. It’s not a total letdown, like, it’s not as if things don’t happen. In the end, I prefer the ridiculous and outlandish events than, say, just some dude in a cloak explaining everything with a smirk and a girl screaming ‘NOOOOOOOO!’ and then breaking a kerosene lamp which burns the whole place down in a matter of seconds, which you don’t actually see. I was just describing Satan’s School For Girls there, a movie too bad for me to even give a review.

The other big seller of this film is it’s lead actor and protagonist, Jessica Harper. She has a great quality to her that lends itself to the mystery and fear, and allows you to empathize with a character who you can see is going through some stress. This includes when she’s surrounded by actresses who probably did a porn or two (hey, haven’t we all? I’m looking your way Sly Stallone) and aren’t really selling their characters, or just coming off as bitchy since that’s the only tone they can achieve. It lets Jessica shine through as the person who can actually display a spectrum of emotions that are believable and relatable. She kinda reminds me of Ellen Page, who even mentions Suspiria in her film Juno, which is one of the many reasons I disliked her snarky sarcastic and desensitized character in that film (horror buffs hate when some cute girl just likes a horror movie cause it’s the goriest thing she’s ever seen, or we love it because then we can say “oh really?” and pull out Dead Alive or Cannibal Holocaust and watch her face turn white).

I wish I could say Jessica went on to bigger and better things, but I’m afraid the SHOCK TREATMENT she received in 1980 wasn’t quite a success, though I have been told the movie can grow on you (sorry, but, no Tim Curry, me no care. I mean, c’mon, I can deal with no Susan Sarandon and Barry Bostwick, even though I do love them quite a lot, but Tim MADE Rocky Horror what it was, and not having him come back as, lik,e a Frank-N-Furter clone or something was the nail on the coffin of that one for me. Also, if you have no idea what I’m talking about, then it’s probably best you forget everything I’ve just said and get on with you life already). It’s still fun to watch her sing.

I know someone is going to tell me I don’t appreciate this movie enough and that to say the ending is anticlimactic or that the middle part of the film gets boring is sacrilege, or that I didn’t even mention the amazing score by the band Goblin whose music would appear the next year in Romero’s Dawn of the Dead, which Argento edited for European distribution and included more music from Goblin for… but I have now, and then some, so get off my back! Really though, Goblin is to Suspiria as John Williams is to Star Wars. Not to mention the number of goth musicians created while viewing this films with its completely engrossing score. Possibly my favorite scene in the whole movie is the blind man in the deserted square, where nothing is happening, but because of the music, we feel total fear. However besides those amazing parts, most of the film is not as enthralling. 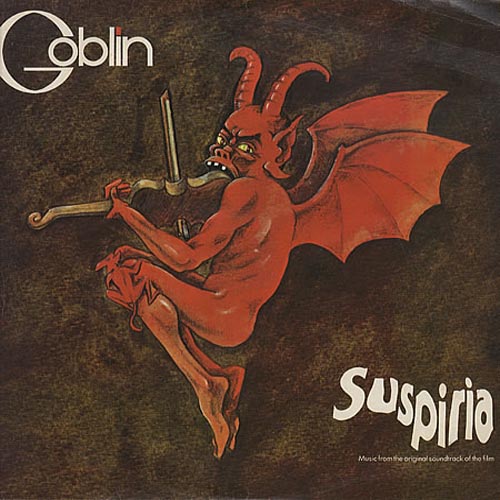 So maybe you think I’m wrong for my benign feelings on Suspiria, but alas, it my review, so I don’t have to care about what you think, or don’t think, or thought, or shall think again, because that’s what I have trolls/gremlins/goblins living in my ears for. Plus, how can I like a movie that shows us a killer committing a murder at the beginning, and never reveals who that killer was? Sure, we find out who the masterminds were, and that magic was used, but whose arm is that? The world may never know. GOODNITE EVERYBODY!