On my death bed, there are a few things I will refuse to repent for. My love of eating Barbeque while on roller skates. The years of my time spent learning everything in the universe about Pinball, including a portal to the disco pinball dimension. And most importantly, my undying allegiance to the greatest B-Movie actor to ever walk the face of the earth, Bruce Campbell. 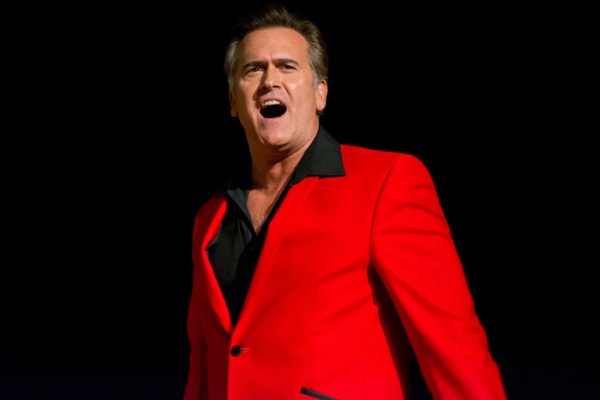 I will watch any movie that Bruce is in, and that includes supporting roles like in Crimewave or Maniac Cop, as well as cameos like Escape From L.A., The Majestic, Sky High, or Aqua Teen Hunger Force Colon Movie Film For Theaters. The guy made playing Spider-Man games on PS2 a joy while he talked you through the controls. He feels like the coolest person you’ve ever met, while at the same time identifying as a complete loser. He’s a Jack of all Trades, A writer/producer/director/actor who did backflips in order to land a role in Brisco County Jr, and made big chins cool despite Jay Leno’s influence. He is hailed as the king of the horror-comedy genre’s greatest trilogy ever to grace color film, The Evil Dead trilogy, and yet he wears another crown, as the king of Sci-Fi channel’s (now SyFy channel) TV Movies – which is why we are all gathered here today.

Let’s go back a ways in time now, to see a channel known as Sci-Fi, who had been filling their airtime by showing cheap horror/sci-fi films, but were having trouble with exorbitant licensing fees for these movies and so had decided to spend their money instead on making their own cheap horror/sci-fi films themselves for almost the same amount of cash. And so the film Terminal Invasion was birthed into existence, with commercial breaks, to an audience that greatly appreciated it. It’s success helped mark the way for sci-fi’s original programing onslaught that followed near after. But why should that matter to you? You just want to watch a movie. Who cares about how well it did. Who really cares?! WHY DOES ANYTHING MATTER!!?!?!??!!

Terminal Invasion was directed by Sean S Cunningham, of Last House On The Left and Friday The 13th fame. The story is derivative of a Twilight Zone episode, but what the hell isn’t? Using Bruce Campbell starring as the criminal hunk, and Rom’s wife and Bajoran hottie as the leading lady who can act better than anyone else in the film, they set out on a combination of Night of the Living Dead, The Thing, that Twilight Zone episode, and some M. Night Shyamalan movie. It’s obviously cheap, but don’t let that dampen the mood. Cheap aliens and shitty fake blood are classics of the B-Movie horror genre. Plus you get to see Jason Jones of The Daily Show give a pretty darn good shot at a military guy and really hit you in the feels.

It’s not great cinema, but it knows what it’s going for and nails it all. Not that there aren’t a few missteps, like where you feel as if you’re looking at a scene made with the specific intent to spend no money. But if every B-Movie could spend more money on themselves, I’m guessing they’d be a lot less fun and full of less laughs and hilariousness.

I mean, you can have a movie that’s trying to be funny and isn’t (i.e. Jerry Lewis movies) and you can have horror films that are trying not to be funny, but are (i.e. Plan 9 From Outer Space) and then there’s the ones who know it’s hilarious and go for it, with no care for how ridiculous they look and are actually probably a little proud of it. Bruce Campbell is the king of this third type of film. He is a muppet of an actor, practically mugging the entire time.His acting coaches were the Three Stooges, and he wears his handsome face like a nerd in drag.In this film he proves that he’s the perfect man to helm the ‘just under over the top’ mentality.

So don’t walk, RUN! to your couch, to sit and watch Terminal Invasion – a film you could probably have made on a weekend with your friends at a warehouse in the winter.