The Man With The Screaming Brain

Home » Blog » The Man With The Screaming Brain

…The Man With The Screaming Brain!!! Part 3 in my week-long gush over the only man in the world I would die for who isn’t associated with a Pinball Machine in any way (no Army of Darkness pinball!??! what the hell, world?) Mr. Bruce “My Name Is Bruce” Campbell. The film that features our man in his feature-film directorial debut. He also stars, produces, and co-writes this gem of a Sci-Fi feature made possible by cheap Bulgarian crews and the fall of Communism. It went into production immediately following Alien Apocalypse wrapped up, and if you keep your eyes open, you can spot some similar cast members in various roles, now getting to use their actual voices instead of being dubbed over. Boy, can you imagine that? Having a complete stranger stuffing themselves inside your mouth? Really makes ya think.

Joining Bruce in this adventure are Stacey Keach, because they couldn’t get Cheech Marin or Joaquin Phoenix I assume, wearing a mustache so that I can actually pay attention to his character instead of starring at his… you know. We also have Ted Raimi, younger bro of Sam Raimi, you know, the guy who played the news reporter in Maniac Cop. It said on his IMDB page that he was involved with something called Spader-Man I think? Was that some sort of vehicle for James Spader that I never heard about? Ted is also the guy in the costumes of the hideous things at the end of The Evil Dead and Evil Dead II. He’s a comic genius from the same background as Bruce with the Stooges physical comedy influence that equates pain to laughter. There’s some other actors in the film, but they don’t really matter, aside from the cab driver guy who really does a good job and deserves credit but not enough for me to go look up his weirdly spelled name. Sorry dude.

The film follows a template created by crushing the scripts to Frankenstein and The Man With Two Brains together and welding them in place with a flame thrower. As much as I wish the film wasn’t so obviously derivative of those movies, it really doesn’t matter when it’s a B-movie, and moreso just adds to the fun of cheap TV sci-fi horror, which exists sometimes for the sole purpose of someone saying “what if it was a combination of 2001: A Space Odyssey and Texas Chain Saw Massacre?” (that was a great film by the way). The problem with this movie though really lies in it’s production, and a little bit in the fact that they had been trying to make this film for 20 years. It just feels like a movie out of time with a budget that forces it to look like a joke too often for you to ever get engrossed enough to enjoy the fun even with a suspension of disbelief that has been honed and stretched well beyond the normal person’s limits. I just wish I could see the movie they had intended it to be, with a proper budget, real credits, taking place in East L.A., featuring a Bruce with a slightly thinner jaw, and a slightly brighter future. Oh Bruce, if only you had followed you heart and run away with me to our imaginary island and drank daiquiris with me on the beach. 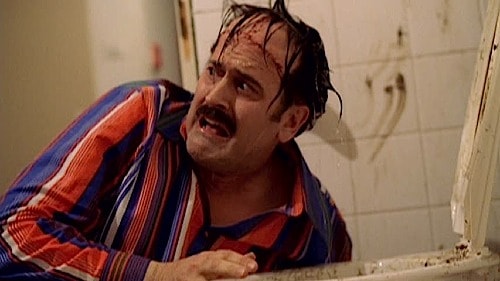 Its enjoyable for the craziness and to remember that this is how some people make a living, but I can’t hail it as a B-movie masterpiece as I wish I could if it had been the film it had planned on being. Instead, I watch it whenever I haven’t seen a gypsy kill anyone in a while, which, though I might try to act cool and pretend I see gypsy murders all the time, it’s just not true, and in fact, the number of gypsy murders being witnessed in person by myself is terribly lower than you could ever get me to admit to unless you use torturous methods for my confession (I wonder what music I could play for kids in 1985 that would make them think that Lord Voldemort is melting their brains?). But where was I? A film that’s a little roughly assembled that probably could have used another coat of paint, but if you’re into outsider art in celluloid form then you can appreciate the hilarious craziness that’s packed into this excuse for people to get paid to act crazy. Oh, and Ted Raimi. Ted Raimi makes this movie good, and is probably the best part of this movie outside of the awesomeness that emanates from Bruce’s body in a constant stream, and flows stronger as he mugs for the camera. If you can believe Bruce and Ted’s acting, you can enjoy this film, just don’t expect any of the sets to look better than an elementary school production of a very tame version of Frankenstein.

So there’s another notch on the ol’ Bruce Campbell movie review belt, which is actually just an extension cord, so I just draw notches with a green sharpie so that the cord doesn’t get ruined. What’s next in the bottom barrel scrapings of an actor whose even most buoyant work barely reaches the bottom of the top? What’s next INDEED!