The Town That Dreaded Sundown

Gooooooood morning Vietnam, and the rest of the world. Freddy Fred Frederick here, with a review of the proto-slasher classic known as The Town That Dreaded Sundown. The 1976 one, not the 2014 remake, which should just go without saying, but I said it anyways. The film is one of those “based on a true story” deals, where the names of people and places were changed to protect the innocent. The events it’s based off took place in texas in the 40s, by a murderer known as ‘the Phantom Killer’, but if you didn’t know that, you might assume that the movie is based on the Zodiac killer who’s spree ended only a few years before the creation of this movie and is very similar in it’s events and and the killer’s executions of his executions.

It’s not a gore filled frightfest like you get from movies like The Texas Chain Saw Massacre, which came out two years prior, but instead seems more like an episode of Law & Order with a very serious narration that also adds a clinical feel to the events and makes them easier to deal with as it comes across more like cold and hard facts rather than experiencing the emotional turmoil of the victims. Not that it isn’t without its terrifying parts, but if it weren’t based on a true story, you’d probably think the writers were lazier than people who use remotes for their air conditioners. It’s full of the cliché about teenagers at make out point getting their comeuppance from a sexually frustrated man in a stupid mask, but with a whole lot less flair than we’re used to seeing from this killer’s 80’s era successors. 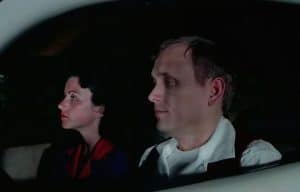 Risking death to get to third base, which in the 40s meant looking at a girl’s ankle.

Instead of following a group of stupid kids around and betting on who will be next, and what will be left of them, this movie is about the whole town and how it reacts to the fear of a masked killer on the loose. Gun sales go through the roof, which, it being Texas, is either surprising that these people aren’t already armed to the teeth, or not surprising because buying a new gun is like getting a fresh loaf of bread to these people. Not that this deters the killer, who’s rampage continues because teenagers just can’t stop making out in cars in secluded locations. See parents, this is what happens when you don’t let your daughter close her door when she has boys over. So kids, next time your parents tell you they don’t want you having a baby, just ask them if they’d rather you be brutally murdered by a man wearing a pillow case on his head. It’s one or the other folks. Or both.

As it turns out though, not just good people can buy guns, and windows can be seen through from both sides, and the side that’s well lit is probably easier to observe and thus aim a gun at. Also, if someone asks you if they heard something outside, you might want to start making peace with your god, cause, you know. So after actions that I just alluded to take place, the whole town decides to board up their windows, because if there’s anything psychotic killers can’t stand, it’s wood. Also, why is it that anytime someone starts assaulting and murdering horny teenagers while wearing a mask, people always assume it’s a white male? That’s discrimination people, and I thought we were better than this. Why couldn’t it be a chinese toddler, or how about a purple octogenarian? Huh? HUH? Tell me that America! Or should I say, CANADA! No wait, I am in America. Ok, nevermind, sorry about that. 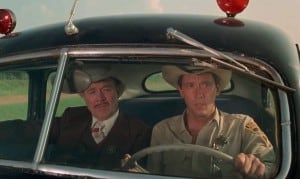 The film closes with the killer never being caught, and leaving us all wondering if he’s still out there now, even though he has most certainly died from old age at this point, unless killing all those young kids gives him special powers of immortality. Hrmmm, makes you think doesn’t it? Or maybe you’ve already moved on to thinking about what kind of pinball machine this movie would make? Well, since it’s from 1976, it would have to be one of the more dull machines, like Jive Time, that’s just a bunch of stationary crap that doesn’t do anything special other than give you a few buzzes and bings, much like the movie itself. But perhaps you like your leisurely pursuits to be more straightforward and without all the bells and whistles, in which case, you go have fun eating some rice cakes and watching C-SPAN, Mister Borey McBorington the third.