TO SERVE A BIG BIG MAN
by MR.LOBO

At 1:01:01 on the timeline in CINEMA INSOMNIA’s PRESENTATION OF EEGAH! THE NAME WRITTEN IN BLOOD(1962) you will see Mr. Lobo’s interview with a Gentle Giant. 7ft-2in actor, RICHARD KIEL was a hero to me and–I assume–tall weird kids everywhere! As a youngster, everyday in school, I put my tin foil from my lunch in my mouth and pretended to be the metal toothed villain JAWS from the 007 Movies THE SPY WHO LOVED ME(1977) and MOONRAKER(1979).
Mr. Lobo 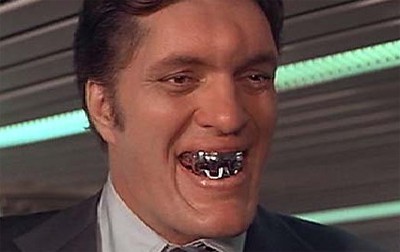 saw Richard Kiel’s serious side when he gave me a lecture about being professional–I was late to our scheduled interview. I felt even smaller but learned an important lesson from a pro. In the same meeting I also saw his generous jovial and sweet side as our interview unfolded–as you will see in the clips we used for EEGAH!

He told me, he started his career as an actor just so he could buy clothes that fit him and sleep in a be that was his size. He starred in dozens of movies over the span of 50 years. 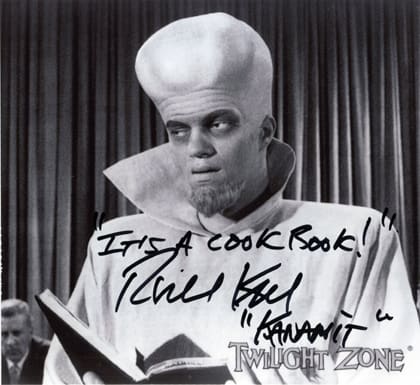 He was bulb headed alien, The Kanomit, in the iconic and popular episode of Rod Serling’s THE TWILIGHT ZONE called TO SERVE MAN.
CInsomaniacs and MSTies know he was in THE HUMAN DUPLICATORS(1965) and was inside the unforgivably hot and uncomfortable dopey-dog-looking-alien costume in PHANTOM PLANET(1961).

He had lots of bit parts in legendary TV shows like GILLIGAN’S ISLAND, THE MONKEES, MAN FROM U.N.C.L.E., FALL GUY, I SPY, SIMON AND SIMON, WILD WILD WEST, KOLCHACK: THE NIGHT STALKER, SID & MARTY KROFT’S LAND OF THE LOST and BORIS KARLOFF’S THRILLER. I remember watching movies like SILVER STREAK(1976) and SO FINE(1981) on TV and getting excited that he had cameos in them.

Though he traveled extensively to many conventions to meet his legions of movie fans–he was wracked with health problems and limited mobility–the curse of many GIANT performers.

The body has to work a lot harder to support such a large frame and the bones break down. Everyone who visits autograph shows knows Chewbacca walks with a cane and JAWS is on a scooter. At some of these shows we were booked at side-by-side..he and his lovely wife were neighbors at our Wondercon appearance. We had to move both our tables to make room for the scooter. Once behind the table he would switch to a regular chair and summon this amazing energy for his fans–all signs of his weakening health became instantly invisible.

Kiel, a Fresno California resident, had broken his leg last week. Reportedly, a family member said he passed away this afternoon in a Fresno hospital. However, he will always remain LARGE and IN CHARGE on the BIG SCREEN and in our hearts. Mr. Lobo would like to think he just traded his scooter for wings!