HO-LY COW!!! Folks, we’re in Halloween Week right now, and while we all get to feel like a broken clock at 6:30 (a REALLY broken clock), here’s an extra spooky review of the 1986 Trick Or Treat heavy-metal-themed horror movie, with cameos from both OZZY and Gene Simmons(that together, don’t total more than 5 minutes, but it was enough to inspire a 2002 DVD cover photos)! Horrible re-release covers aside, this film earns the tag “horrible” on its own. Or maybe we can just call it misunderstood.

Trick Or Treat is the kind of movie made with a teenage mentality, similar to Corey Haim in License To Drive, where, “hey, isn’t it really cool how stupid and antagonizing I am? It’s the eighties and us teenagers live in the future, while our parents are so lame!” You know, the Pepsi Generation. It’s one of those movies like the Brad Pitt early venture Cutting Class, where they just took a common phrase and made a movie around it, plus a bunch of entitlement issues they mistaking labeled as “teen angst.”

Anyways, this Columbine wannabe, Eddie Weinbauer, has unrealistically abrasive bullies busting his chops. It seems like some sort of rational decision to report their obvious infringements on school policies, but instead he takes the humiliation like some masochist and goes home to cry and listen to his recently deceased favorite hair metal rock star Sammi Curr. Just moments after finishing a letter to Sammi, in which he writes his aching heart out, Eddie finds out Sammi had died in a fire. So Eddie gets the acetate disc (music buffs, you can rejoice knowing that your awareness of what an acetate disc is has finally paid off, but despair over the fact that I’m just going to explain it anyways, since nobody knows what the hell it is), which is the first single pressing of a record before it’s mass produced, made to just check it’s all good and ready to go, of Sammi Curr’s last unreleased album, “Songs in the Key Of Death” (Stevie would roll around in his grave if he were dead).

A radio DJ named Nuke (cue 2 minute Gene Simmons cameo) just happens to give this priceless object to some kid who hangs around the local rock station occasionally, instead of having a life. So then Eddie goes home, and like any good 80s teenage moron, decides to play the record backwards. Now, we all know that when you do this, it invokes the dark beast to return to our realm and wreak havoc on the sinners above, HOWEVER this film suggests that instead, Sammi Curr is resurrected though this heinous act, and is now going to use his power to do a few things: 1) He’s going to help this kid with his bully problem by almost murdering a bully in front of Eddie, 2) He’s going to crash a high school dance and be the front man for the crappy band that’s playing, and 3) He’s going to kill everyone, starting with the students at this random high school, and that kid he was helping before. 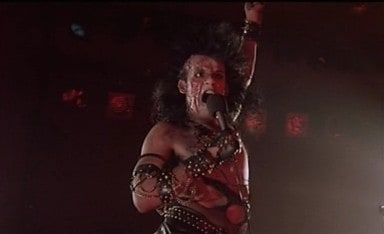 But it’s only when you play the record backwards that Sammi can come out to kill you. And the record is destroyed, and now so is the tape that this idiot made of the record playing backwards. But, OH WAIT, Didn’t Nuke say he was going to play the record at midnight on Halloween? We’ve gotta stop him! Those of you paying attention are going “but, it doesn’t matter, it has to be played backwards,” but Nuke just has a taped recording of his broadcast (guess Gene didn’t wanna do another scene) AND he just happened to decide to play the record backwards, YA KNOW, FOR WHATEVER REASON!!! Also, Ozzy pops up as a minister decrying the evils of Heavy Metal music in what turns out to be the best minute of the whole movie. And yeah, you can’t understand a bleeping thing he says.

So what, did I give in and finally review a bad movie, or am I just having a bad day? Naw, the film has its moments, like when the one house has a mirror over the fireplace, and a brown chair, with a desk with a built-in lamp next to it that was pretty much exactly like my grandparent’s house. There’s also a funny joke about a toilet. BUT THAT’S IT. Watch at your own risk.